A Phantom with its spirit back

In the early 1930s, Britain was awash with the great divide that came with the Great Depression. Yet while some areas of the country were broke and destitute, others flourished – particularly the motor industry.

The streets around us began to flicker with electricity instead of the slow burning of gas lamps. And horse-drawn carriages were phased out with the sudden influx of motor cars.

While some scrimped their last shillings towards bread, others flashed the cash and took advantage of low interest rates with no expense spared.

In London’s affluent Kensington, the Olympia exhibition centre would become the shining platform on which one of the world’s most luxurious motor companies would unveil their latest design. At the annual new motor show in 1930, the clear curved roof shed light onto the new Phantom II by Rolls-Royce; a stately and elegant new car that was to become the pinnacle of extravagance. 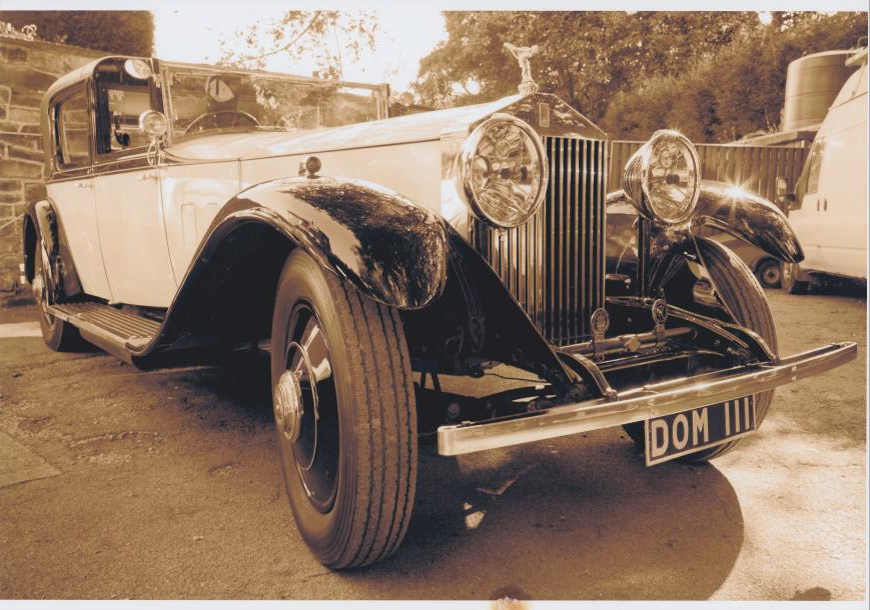 Only 1,680 Phantom IIs were made over their short production time as the asking price would have cost more than an entire housing estate or street. At a time when if a man was getting £2 a week he was doing well, you can see it would have been unaffordable for most.

Rolls-Royce have long been synonymous with wealth and indulgence, their expert craftsmanship and cutting-edge technology making them popular amongst the upper class, rich and powerful.  The Mountbatten family, descendants of Prince Phillip, are said to have had a Phantom II in their fleet.

After the success of Blue Angel which made her a Hollywood starlet, German actress Marlene Dietrich was gifted a green version by director Josef von Sternberg, with the exquisite Phantom II subsequently appearing in their next film, Morrocco.

Yet the model in particular, chassis number 90GY was sold to a Mr Swinchatt of Edgebaston, Birmingham for £3,054, a lavish purchase at a time of great economic slump.

With the chassis built in Derby, royal coach builders Hoopers were commissioned to create the relatively rare Sedanca-de-Ville body, forming a black and ivory limousine-style town car with separation panel between driver and passenger plus a detachable roof panel for the driver upfront.

I imagine Mr Swinchatt wore a fedora and a double breasted coat to drive his newest purchase, perhaps a lady friend in the back with her fur stole, suede gloves and makeup galore.

After seven years of enjoyment, Swinchatt sold the car to Mr Whitfield of the same town who held it in his possession until 1956, when he sold it to Mr Jones of Moseley, Birmingham.

It is here that the story of this prolific motor takes a turn towards its namesake Phantom. After many years with Jones, the once elaborate vehicle saw its fate turn ghostly, ending up a shadow of its former glory in his garden in Moseley; covered with a sheet, the almighty car even had the 40/50hp 7.7l (7,668cc) engine missing.

A real sorry state of affairs, things took another turn for the worse in the early 80s when the car suddenly vanished into thin air with not even an exhaust trail left behind.

In 1985, the car, with distinct registration plate DOM III, turned up in Shardlow, Derbyshire under the ownership of Mr Nudd who kept the car for a few months. Late in the year, he sold it onto Mr Pownall of Nottingham.

Presuming the current state of the vehicle, it suggests the task set out in front of Nudd was one he wasn’t willing to undertake. A labour of love, it is believed that Pownall had the resources to fully restore the car back to its shining state.

You may have been reading wondering why we are telling you such a story about this mystery Phantom. Yet it is here that its story treads over our borders with its sixth and current owner, Jack Anderson.

Pownall put the car up for sale in 1995 but the Phantom II wasn’t to be rehomed. After trying again three years later, the car caught the eye of Jack who was looking for something to commemorate his recent retirement.

This May marks 19 years since Jack bought the car and brought the mystery Phantom back to his Swinton home. 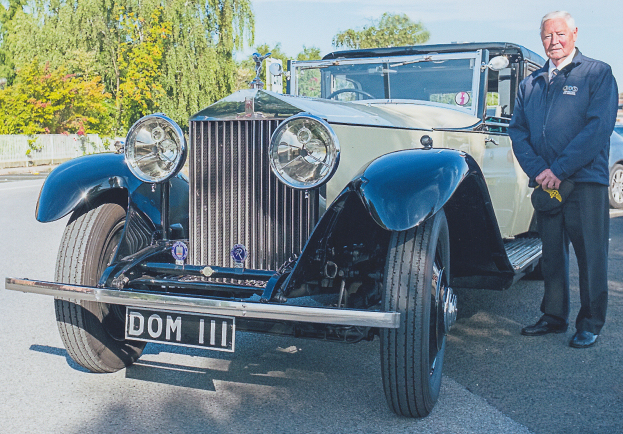 Jack Anderson with his Phantom II

Born to a Wombwell miner, Jack, now 85, started work as an apprentice joiner at 14 before going on to starting his own successful building company.

With a love of cars, having owned a Porsche and the same model Bentley as the Queen with a telephone in the back, Jack decided to treat himself in his pension years.

“It felt a little selfish to buy something like a Phantom. I’d had a Rolls-Royce for over 30 years but I’d always wanted a classic car. But everyone has enjoyed it over the years, especially my three grandchildren,” he says.

Since owning the car, Jack has attended and won many vintage vehicle rallies including Best in Show at Chatsworth. It was at the annual Rotherham Show last year that we came across the magnificent car.

“I went to the Wortley Vintage Vehicle Rally a couple of years ago and this lady came up to me and said this had been her father’s car. She was Mrs Jones, her father the Moseley garden owner.”

Although it does make an appearance on the streets of South Yorkshire from time to time, the upkeep of the car means its pride of place is usually in the warm garage, the might wheels overpowering everything else.

“I have to change the oil every time I take it for a run but there’s not much to really service. It only has the one grease pipe.”

With the similar models appearing on the glittering screen, the Phantom II has made its mark on the world through films such the James Bond franchise, often used by villains like Kamal Khan in 1983s Octopussy. Its successor, the Phantom III is most famously used by Goldfinger, its yellow and black coach work by Barker rather than Hooper.

From a car chase by Nicholas Cage in the Sorcerer’s Apprentice to an exchange for the Holy Grail in Indiana Jones and the Last Crusade, these distinguishable vehicles make up a small piece of British history.

“People always ask me what it’s worth and I don’t like to answer. To me, it’s priceless.”

The Micra has got its mojo back

BBR Auctions: Stuck between a rock and an antiques place