Anston Cricket Club: Almost a Century and Not Out

The club, which was formed in 1919, has been awarded a total of £130,000 from Sport England and Biffa Award to use towards making significant improvements to the facilities at the club. 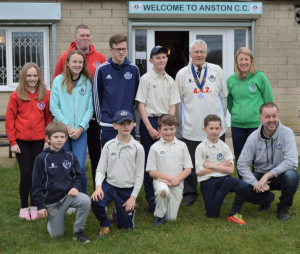 Some of the junior players and volunteers

With most the funds given by the Sport England Inspired Facilities award, the club hope to encourage more members to join with the modernised changing facilities plus a welcoming lounge.

Using money gained from tax on waste disposal for projects near landfill sites, the Biffa Award Landfill Communities Funding money will be used to support the wider community, creating facilities that will be used by other groups in the area also.

One of only a few groups in Yorkshire to be receive this funding, and the only project in Rotherham, it has been a year-long slog waiting for their application to be approved. But work finally began back in January with the new-look clubhouse hoping to be unveiled at the end of April ready for the 2017 season.

Overseen by club member Alan Platts, the project will see the showers and toilets overhauled for both home and visiting teams, creating disabled access for a more user-friendly venue. A brand-new umpires room is to be built along with equipment and bar storage.

After the match, the clubhouse is being enlarged and made more comfortable to allow for better usage within the community.

Exciting times for both the players and volunteers, this is not the first time in the club’s history that the facilities have been improved.

When the club started back in 1919, they didn’t even have a pavilion, playing from a field off Woodsetts Road, North Anston. By 1924, they moved to the new Miners Welfare Park on the site of their current ground, which saw £1,500 used to acquire the land and create a cricket square, football pitch and bowling green for community recreation.

However, the public didn’t know their boundaries and, after the heavily-used parish hall was built in the 30s, the club looked for an alternative site after various pitch invasions during games.

Their following home ground would become Charlie Moore’s field in South Anston by the church. There were no facilities and water had to be carried in a dolly tub from a house on High Street to their little wooden pavilion, ready for tea surrounded by sweaty socks.

But taking the term cow’s corner quite literally, Moore insisted his cows were to remain grazing in the field which caused quite the disruption to games. After re-establishing the club after the war, they were forced to moo-ve and yet another home ground was sought.

A moo-ve back to Ryton Lane

In 1949, the village’s Lord Netherthorpe, Sir James Turner was pivotal in negotiating the sale of land next to the Welfare park from its owners for £175. Creating sporting history, the club became one of the first to own their own ground having raised many £10 loans from those interested in the club which were to be repaid after ten years.

Sir James became the club’s president and was often seen out in the field – that or ferrying players back from matches in his Rolls Royce.

Back at the Ryton Lane ground, they brought their old wooden hut for changing facilities, but tea was held in the parish hall much to the inconvenience of the players had to take off their spiked boots and walk across the field when all they wanted was to carry on play.

Purchasing their own wooden tea hut in the 1960s, this wasn’t their greatest catch as it blew sideways in strong gales. Instead, money was raised to build a brick teahouse, with a brick pavilion soon following.

All work was undertaken by members, including the money stumped up for the work. A trench was dug for a water supply, concrete and bricks were donated and the new set-up opened in 1964.

Two further extensions followed in the 80s and 90s, with today’s renovations capping off many years of improvements off the field.

Behind the batting line, the club play competitive cricket in various regional leagues such as Bassetlaw and Sheffield, with players aged seven to 65. Teams start at under nines, with seven senior squads including one mixed-sex team.

With ladies and girls’ teams already, the club are hoping to encourage more females to take up exercise and sport by offering keep fit classes to keep the community healthy.

Run solely by volunteers, all the players and members pitch in to help with the day-to-day activities plus any fundraising or social events.

With an exciting future on the horizon, here’s hoping the club will still be bowling us over in another 100 years.