While having bacco in your pocket might be becoming a thing of the past, the fascinating social smoke trail it blows around us means that tobacciana continues to be a rising commodity within the antiques and collectables scene.

When European explorers stumbled across the indigenous Americas in the 16th Century, their voyage saw this new-found tobacco phenomenon shipped back across seas to be smoked across Europe.

Originally used for spiritual ceremonies by the Native Americans, its usage changed from sealing treaties to treating stress, often found in apothecaries. 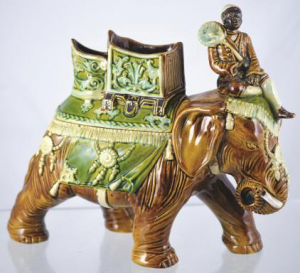 As its popularity grew outside of its medicinal purposes, businesses cashed in on the colonial crops and a whole new industry was born. By 1614, specialist stores popped up, with tobacco found in alehouses, grocers and chandler stores. To cope with demand, British tobacco fields began to crop up around 1620, particularly in Gloucestershire.

Stored in jars or humidors to prevent it from drying out, tobacciana collections are often littered with some of these early designs made by potters across the world.

Bohemiam potter Johann Maresch introduced figural designs with the lids characterised with heads. Work by Wilhelm Schiller and Josef Strnact was often unglazed, whereas Schafer and Vater produced a series of bisque jars with pink or green tones predominating.

Barrels used for shipping and the yellow and brown rings of tobacco rolls were habitually used. As too were characters such as Pocahontas, Turk and the Black Boy. In continental designs, nursery rhyme characters, animals and even clowns adorned the many jars produced.

British potters made them too, with designs by Wedgewood, Grimwade, Denby and Wemys showcasing tasted from refined to bawdy.

With an infinite number to collect, they often bring great pleasure to sale rooms around the world. But perhaps the most collectable and expensive of them all is the Wally Birds humidor by Martin Brothers, named after chief potter Walter Martin. The striking blue birds design is thought to be valued in excess of £30,000.

Although it hasn’t ever taken flight to us here in Elsecar, we do have an exquisite collection of tobacciana which will go under the hammer on Saturday 1st and Sunday 2nd April.

The Bacco Collection sees a large display of tobacco and smoking items all from a single owner – a private museum if you wish. There’s almost every item imaginable such as pipes, lighters and vending machines.

Such a vast collection to inhale, be sure to order a catalogue to see the entire lots in full-colour. Although the habit may be waning in times of health scares and education, the collecting of tobacciana won’t puff out just yet.

For more information about the collection or to order a catalogue, visit the BBR website

A Phantom with its spirit back