Saturday 26th April 1997. A gloomy spring day that probably holds little significance to the majority of the country.

But if you’re from Barnsley, Saturday 26th April 1997 no doubt goes down as the single best day of the year, decade, or even your life as it’s the day Barnsley FC secured automatic promotion to the Premier League for the first and only time in its 130 year history.

For those at Oakwell that Saturday afternoon, memories will still be ripe of the final home game of the season against the Bantams. Bodies were trembling with nerves and trepidation in the knowledge that a win would mean they were up in favour of fellow promotion hopefuls, Wolves.

A header from Paul Wilkinson saw the Reds lead 1-0 at halftime. Just minutes before the final 90 minute whistle, Clint Marcelle sealed the deal past Bradford’s keeper. 2-0. 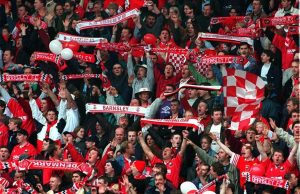 The East, West and Ponty stands erupted into pure jubilation. A sea of 18,000 red and white believers. Outside of Oakwell, the whole town went on a promotion party that never seemed to end.

It might have taken 110 years since the club was formed, but top flight football was firmly on the cards.

To mark 20 years since the Tykes played their one and only season in the Premier League, a commemorative documentary, Daydream Believers, has been produced.

A combination of interviews and archive footage, the film has been professionally written, directed and produced by creative agency Graft thanks to a crowdfunding appeal which saw them raise £15,000 in donations.

Produced by Liam Dyson and directed by Chris Johnson, the pair rallied round the former Barnsley stars and managerial team from that glorious season to find out more about what life was like back then.

“Those two late 90s seasons made up the most successful period in the club’s history, something most never thought we could achieve. Barnsley hasn’t had the best run of late and so we wanted to do something to remind people of those days while also inspiring the younger generation who weren’t even born back then as to what can be if you just believe,” Liam says. 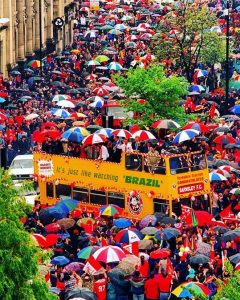 The promotion to the Premier League came at the same time as a great deal of hardship in the town. The controversial closure of the pits had struck a huge loss for employment levels in Barnsley and the economic impact was devastating.

However, as former Barnsley striker Jan Aage Fjortoft says in his interviews for the film, sport, particularly football, can change a world.

Despite job losses and a struggle to survive, the promotion brought much-needed joy to the town and communities rallied round the players. With it came a sense of hope, belonging and identity. This was the Barnsley they wanted to be recognised as.

Of course, manager at the time Danny Wilson takes us back through the season; one which saw horrendous defeats, 82 goals conceded and Barnsley lagging in the bottom three virtually all season, only to be relegated at the end of it. 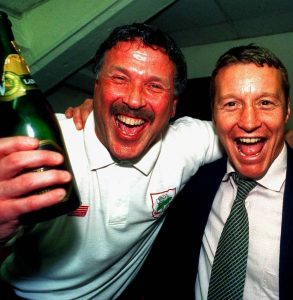 However, with true Barnsley grit and determination, they weren’t prepared to go down without a fight.

Club legend, big Eric Winstanley also looks back as his time as assistant manager, while former chairman John Dennis talks fondly of his boyhood club which became his whole life.

Captain Neil Redfearn leads the players on the books, with the former midfielder finishing the 1997-98 season as Barnsley’s top scorer with 10 goals. One that no doubt goes down in history for him is both his and the club’s first Premiership goal nine minutes into the inaugural game that season against West Ham.

Ashley Ward, Nicky Eaden and Adie Moses also reminisce about their top flight memories, while national football journalists commentate on the highs – and lows – they remember. 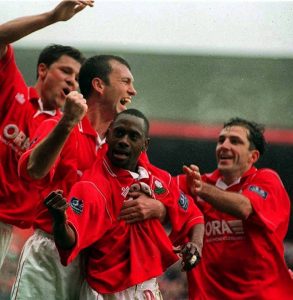 After almost 12 months in the making and thanks to composer Simon Lindley, designer Jamie Walman and editor Mike Eccles all giving their time for free, Daydream Believers is set to be show to the public for a limited time from Monday 3rd September at the Lamproom Theatre in the town.

Tickets are on sale now priced at just £10 each, with all money raised being donated to local charities.

If you remember those days when it was just like watching Brazil, this is definitely one not to miss.

To find out more about the production or to pre-order the DVD, visit www.daydream-believers.co.uk

Tickets for the film showing are available at www.barnsleylamproom.com

Hoping to be the Kings of Barnsley’s music scene