As one of the fastest-growing sports around, women’s participation in rugby has seen more than 18,000 ladies in the UK take to the field to try a new sport.

Thanks to England captain Katy McClean and her team’s success at the 2014 World Cup and last year’s Six Nations and Olympic Games, women across the country have been inspired to pull their socks up and finally tackle their sporting ambitions.

And for women in Barnsley, their town’s team are making great strides against the regional competition, really putting women’s rugby in South Yorkshire firmly on the map.

Having only been an established team for two years, the Barnsley Ladies squad have since gone on to win their first ever league last year, and are looking to emulate their success once again for the 2016/17 season. 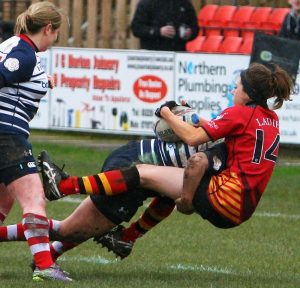 After reaching the maximum age for the town’s youth sides, some of the girls from the under 18s teams were looking to advance into the senior league. But with no official team in Barnsley, many of the players were left in limbo.

Thanks to two of the players’ fathers, Stuart Bennet and Simon Frow, the duo decided to help the girls achieve their goals, launching the women’s side in 2014 which they jointly coach and manage.

Having coached the youth teams before, it was a natural progression to flow into a senior side.

“They would have had nowhere to go and nothing to do if we hadn’t have got involved,” Stuart says.

Starting with 11 players, numbers have since expanded to 28, with women from all walks of life making up the team.

Along with Stuart’s daughter Beccah, one of the youngest members who became interested in rugby while at school and played for Yorkshire u18s, the age range reaches right up to 40-year-old Anita, a teacher who once played rugby at a high level and finally got back into the game aged 38.

University students are joined in the scrum by a policewoman, and physiotherapists stand tall and proud by marketing experts.

Captain Alix is a former paramedic turned science teacher. And loose-head prop Dawn is an electrician at Cadburys, who enabled the team to be awarded a £5,000 grant from the chocolatiers to purchase a scrum machine.

Some of the ladies have always played rugby, others have made the transition from football. Some have been inspired by partners or brothers who have played, and other have gone off for family or education commitments and returned once again.

Playing full-contact rugby union, the ladies are of all shapes and sizes; from small, pacey whippet backs streaming up the centre, to the strong anchor tighthead props who put their head where it hurts. 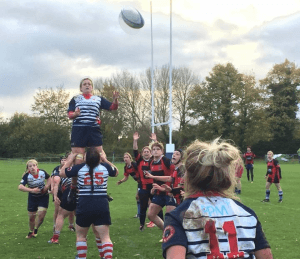 But before any league games or scrums could take place, the newbies had to fight for their right to join the league, playing eight matches and 12 friendlies against established teams. Since their first ever match on 31st August 2014, the team have continued to make waves amidst the competition, growing in confidence with each result.

After applying to join the northern league, the team started off their first season in the fifth tier, as part of the National Challenge North 2 East league. After a nip and tuck season, chasing for the top spot against rivals York, they finished last season as champions, moving up into the fourth tier.

As we head into the New Year, Barnsley Ladies sit at the top of the National Challenge 1 North league and are nine points clear of the opposition.

With just eight teams per league, the girls face the likes of derbies at Doncaster to long-distance matches at the Isle of Man.

The first match of this year’s season saw the women annihilate Ormskirk with a magnificent defeat of 99-0.

Based at Shaw Lane Sports Centre, home to many other celebrated sports teams in Barnsley, their home matches see the likes of Chester and Halifax head to the town.

Patrons for women’s engagement in sport across South Yorkshire, the team are also heavily involved with the likes of Sport England and Rugby Football Union, gaining a well sought-after reputation for their promotion of females in sport.

In 2015, the team held an event to encourage more members, with over 50 ladies turning up who had never played rugby before, winning a £3,000 grant from the RFU for the most participants to a pitch-up and play event.

The ladies are also invited into local schools to teach girls the ins and outs of rugby, with the hope of inspiring more and more young women to take up the sport.

Having already smashed their target of getting 25,000 women playing by 2017, Sport England are hoping that teams like Barnsley will continue to motivate more women into taking up a sport, be it rugby, tennis, football or even yoga.

By breaking the mould and stereotypes of women in sport, ladies like these here at Barnsley are proof that no matter what, we girls can do whatever we want to do.

For more information or to join, contact Stuart at stuart@bennetts.f9.co.uk

Something to get your Teeth into