1st September 2020
Out and About
Read more

With Alan Blakeman of BBR Auctions

When I was a young lad, I was out playing one day when a glimmer of glass floating around the edge of a water-logged weir caught my eye.

With typical childhood curiosity, I defied all knowledge of hazards my parents warned me of and picked up this strange broken bottle which oddly had a marble stuck in its neck.

After studying it all the way home, I was fascinated by it and eager to find out more; my dad called it a Codd, with memories of his own childhood guzzling fizzy pop as quick as can be to play with the marble inside.

It is from this broken Codd bottle that my lifelong interest in bottles and antique packaging was born.

As I grew into my inquisitive nose, which was always on the hunt for sniffing out something transparent, my hobby became glazed in greatness, discovering a penchant for industrial heritage that seemed to surround me everywhere I went.

Since taking over the National Bottle Club in 1979, my days have been spent wrapped up in the heady world of antiques and collectables, opening BBR Auctions down here at Elsecar in 1991. I even named my bottle museum Coddswallop after that very first find from which everything has stemmed since.

So, it is no surprise to me that others have often been enamoured in glass manufacturing which once ran strong through British veins, particularly here in Barnsley.

But what some may not know is that King George V was one such fellow whose eyes gleamed bright at the sight of such a fascinating industry.

The Royal Visit to Rylands of 1912

When the King and Queen visited Barnsley on July 1912, they spent five days taking an extensive tour of South Yorkshire to acquaint themselves with the lives, work and homes of their industrial subjects.

Arriving by royal train at Doncaster, they were to be guests of Earl Fitzwilliam at Wentworth Woodhouse from which they would make daily visits to different areas of our region.

One planned visit during their time here was to Rylands Glass and Engineering at Stairfoot, otherwise known as Hope Glass Works. 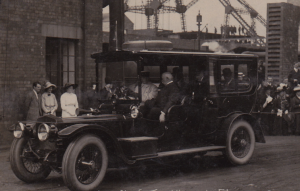 As their Daimler pulled up outside the gates at 10.30am on 10th July 1912, the royal couple were met by a chorus of the National Anthem as hundreds of workers from Rylands and Wood Brothers works and their families waited for the special guests.

An elaborate archway had been constructed at the entrance from 2,200 Rylands battery jars, with directors Joseph Hewitt, T. Mitchell and Alphonse and Frank Wood waiting to guide their guests through the factory to inspect the many processes which occurred inside.

Once inside, 50 boys and men paused briefly from their work to welcome the royal party before resuming their tasks. 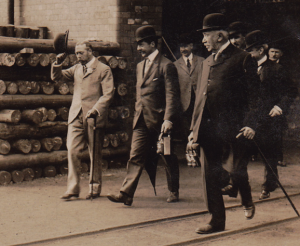 Although only lasting 30 minutes, the tour included a visit to the furnace which encased a reservoir of 200 tons of molten glass, a chance to see commemorative bottles being made, and inspections of marble making, annealing and sorting ready for dispatching.

While one thousand hands produced approximately 500,000 bottles and jars plus 8,000 wooden packing boxes each week, the King was also interested in the machine which made their famous vacuum fruit jars.

A May Queen jar reminded them of the Duke of York and Princess May’s engagement 20 years before, and the pair each chose a glass novelty, or frigger, fresh from production; the King chose a glass pig and the Queen a swan.

Rylands was known for its great many vocalists amongst the glassblower ranks, with workers breaking out into renditions of Rule Britannia and other patriotic songs. As they passed through the packing department, echoes of their tribute to the Queen wafted through the air.

“Kind, kind and gentle is she. Kind is my Mary. The tender blossom on the tree cannot compare with Mary.”

While meant as a compliment to Queen Mary, some workers were aghast at their overweening praise and felt sure the Queen would be offended – to which she replied of her delight at their song.

As the couple left to throngs of Rule Britannia lyrics, they reached a soda factory which had been set up outside to demonstrate the Cood, swing stoppers and siphons being filled and sealed; the King was fascinated with the rotary machine which could turn out 15,000 filled bottles per day.

Gifted with a photographic album of the works plus three soda siphons in rose pink, crystal white and azure blue for our patriotic colours. The King was overjoyed with these special items and allowed them to be known as Royal Crown Siphons in future.

A sense of South Yorkshire 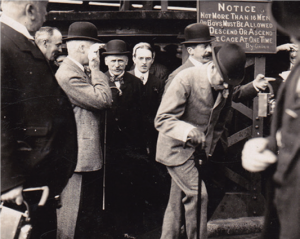 During their time here in Barnsley, the King and Queen also visited Conisbrough Castle to see the keep, dungeon and armoury, as well as Clifton Park and Brodsworth Hall.

On their arrival, disaster struck at Cadeby pit where 88 men and boys were killed. The next day, the King had planned to descend Elsecar Main colliery which many presumed would now be off the list. However, as a show of faith and humility to those who lost their lives, the King went down and became the first king to enter a pit shaft.

Barnsley might have won the FA Cup that year, but 1912 will always be remembered as the year that our town and its industries received the Royal seal of approval

The Lands of the Gods