Treading the path of life with curiosity, endurance and an eye for nature, the Dearne Valley Ramblers have been discovering what lies around our glorious region for over 20 years.

One of life’s best medicines, walking invites you to get out into the open air, exploring the world one step at a time. And by joining a local walking club such as the Dearne Valley Ramblers, you can gain a social pastime that not only helps you get fitter, but also introduces you to new people along the way.

Since the club’s birth in 1996, the Dearne Valley Ramblers have amassed a wide range of members from all walks of life. Today, the club is made up of 114 keen walkers, aged 32 to 84, who have become more of a social group, with the promise of a hearty walk an added bonus.

From nurses to architects, engineers to head teachers, many of the members are now retired, looking to gain another hobby in their new-found spare time. There’s also a four-legged fellow or two who regularly take part in the walks, with dogs a well-loved, much-welcomed addition.

With impressive, interesting routes making up their busy schedule, the group take part in weekly weekend walks around the South Yorkshire area, focusing heavily on the Trans Pennine Trail. Taking advantage of a midsummer night’s dream walking conditions, the group also walk on Wednesday evenings from April to September.

A diverse selection of walks made up of varying distances and difficulties, there is something for everyone in the walking calendar.

From trudging through the mud in Manvers to tottering along a rocky ridge in Grindleford, walking, talking and eating in Low Bradfield, to taking an urban stroll in the city of Sheffield -they also stride into different territories, taking in the sights of Derbyshire and North Yorkshire.

With visits to the plague village of Eyam, a sweet treat in Bakewell, or heading to beach at Flamborough, there’s always new scenery to stumble upon.

As part of the club’s 20th anniversary last year, they held lots of commemorative events such as barbecues, social gatherings and a re-visit of the club’s first ever walk from 1996. They also produced a recipe book and calendar, as well as walking the entire 98-mile route of the South Yorkshire Way, taking the Thorne to Sheffield journey in rural and industrial stages.

This year sees another big milestone for the club, with five of the members celebrating their 70th birthdays – at least there’s plenty of exercise planned to walk off all that cake. 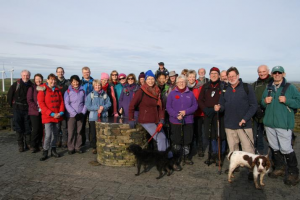 You should never ask a lady her age, but having been part of the club for around ten years, associate social secretary Christine Hebden can’t let her special day go unmissed. Along with husband Nigel who is the club’s chairman, Christine has been helping the schedules both with and without walking boots run smoothly for many years.

And for former police inspector turned club press officer Tony Swaby, he will also reach this platinum age. After retiring, Tony and his wife Stephanie were looking for a pooch-friendly walking club to join, a rarity in the rambling scene.

Spotting a photograph in the paper of the Dearne Valley group stood at Sykehouse with three dogs in tow, they joined the following week and have never looked back since.

Along with the five big birthdays, 2017 will also see the revival of the Rotherham Walking Festival in October after a six-year hiatus. Once a celebrated event on the walking calendar, the ramblers are excited to play a part in the festival once again.

For more information about the Dearne Valley Ramblers, visit www.ramblers.org.uk/dearne-valley

Anston Cricket Club: Almost a Century and Not Out