A fighting force in the saleroom

As Christmas comes around, homes across the world will see new additions added to the already bursting toy boxes in nurseries and play rooms, with new fandangle must-haves taking centre stage and what remains of last year’s toys being left of the shelf.

Yet at Sheffield Auction Gallery, their recent specialist toy auction proves that those once-loved toys are better off collecting dust in the attic or under the bed than being thrown away for good.

As the region’s oldest auction house dating back to 1840, Sheffield Auction Gallery are one of the area’s leading toy specialists, holding bi-monthly sales with everything from train sets to teddy bears, dinky toys to dolls falling under the gavel. 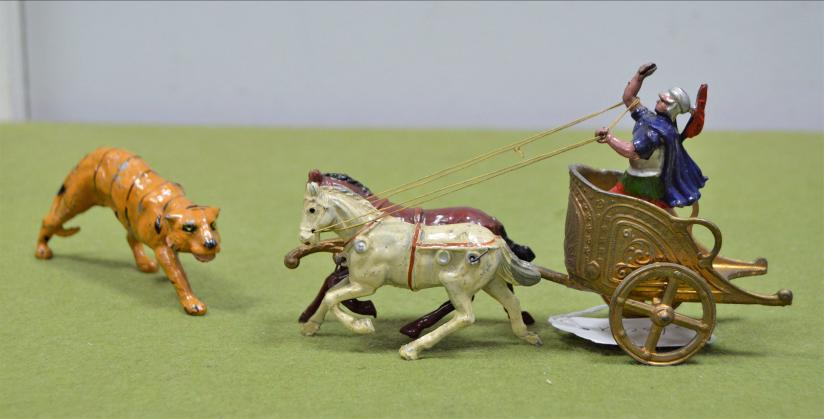 In October, a single toy figure collection went under the hammer for just shy of £20,000 – just think how much LEGO you could buy with that.

Growing up in the pre and post-war era, many young boys were hell bent on becoming action men, reliving the stories of their fathers or uncles who had spent years away in combat. Toy soldiers were prevalent in toy collections, with rows and rows lined up ready to face each other as the battle waged on. 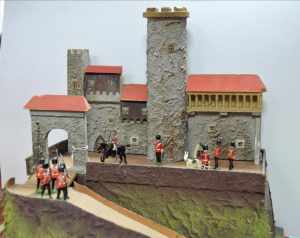 A fort and model soldiers

Step by step, collections were added to; you could never just buy one toy soldier, you needed to buy a pack. Then, with one pack came the need for another, and another until the troop was a force to be reckoned with.

Having spent his entire adult life collecting toy soldiers and model figures, the gentleman collector had amassed over 10,000 single pieces – the size of a literal small army.

On his death, his single collection, mainly soldiers, were handed over to Sheffield Auction Gallery to be sold in lots at auction.

Having spent 40 years in the specialist collectable toy market, this was possibly the largest single model collection that valuer and auctioneer, John Morgan, had ever seen and dealt with; with far too many to count, the assembly of figures could reach anything up to 30,000 items.

While the collector probably never played with the figures in a conventional way, the majority of the toy soldiers are loose rather than boxed, with many duplicates in the mix.

During the gentleman’s 40 or 50 years of collecting, each item was sorted and categorised, his home filled with storage boxes neatly labelled in a logical, systematic way. Circus figures in one box; British army figures in another; soldiers from WWII standing to attention; popular TV and film characters bringing back memories.

“Most collectors are not interested in both toys and military, they either choose one or the other so it is very rare to find such a great collection which includes both,” John says.

At a previous auction in July, the military collectable section of the collection brought in over £5,000 from 56 lots. 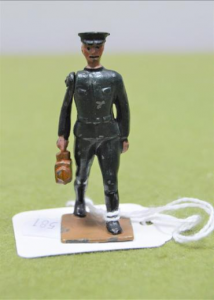 A rare chauffeur sold for £80

While some of the figures were valued at a few pence, other lots were worth hundreds of pounds, with the sheer amount of lots up for sale helping to bring in the grand total.

Before the lots went to auction, John and his team at Sheffield Auction Gallery had the almighty task of deciphering where, when and who by the figures were made to be able to put a value on the collection.

A lot of the figures were indeed from Britains, the company who revolutionised toy soldier production in 1893.

While toy soldiers have been in existence since the Ancient Egyptians, played with by the rich and noble, mass production didn’t start until the end of the 18th century, with early tin soldiers appearing in Germany inspired by the exploits of Frederick the Great, King of Prussia.

However, William Britain thought up the idea of hollow casting, creating cheaper and lighter products than their German counterparts.

With the toy trade relying heavily on Christmas, Britains released their first collection ready for Christmas 1893, with the near lifelike miniatures of the world around us a consistent core of the long standing business.

Focusing heavily on soldiers from different regiments, cavalries and infantries, each of Britains figures was known for its true representation of each distinct uniform and role in the wars. 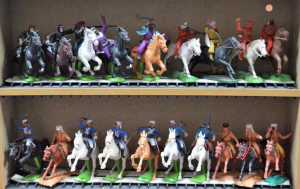 In the collection, the gentleman had figures from across the world, from Indian and Turkish soldiers to Australian and South African armies. Along with drummers and buglers plus many horse-drawn troops, the collection also saw the Egyptian camel corps ready to trek through the desert.

The oldest item in the collection was a 1907 South African soldier from the Boer War – its oval rather than square base giving away its production date.

While many children favoured relevant soldiers from the Great War and World War Two, toy makers also went through a period of remaking historical figures from the Civil and Napoleonic wars, as well as Romans, Vikings and even former members of the royal family.

A 1930s figure of Richard I came with its original Charles Morrell box, with the high end Burlington Arcade toy shop having special lines made exclusively for them by Courtenay – it sold for £130.

In 1966, the government stopped lead figure production due to the health scare of lead poisoning, so many toy manufacturers such as Britains focused solely on plastic toys.

“The problem with plastic is that the paint never really stuck and they could be chewed, bitten and broken more easily. Finding a plastic figure in one piece and fully painted is rare.” 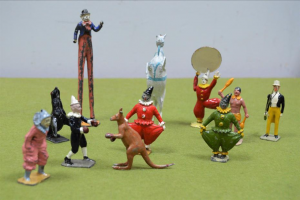 Along with one-to-32 scale replicas of regiments and soldiers from across the world, Britains also did special orders and exclusive commissions, such as a WWII khaki drummer which turned up in the lot at Sheffield Auction Gallery.

“Pieces like this are like the holy grail of individual collectors’ items because they’re so rare. How many were produced? Probably very few because they were special orders,” John says.

Whilst you would think that the least popular or fewer produced models make for rare collectors’ items, it is also those which were heavily played with that can bring in the most interest for their rarity.

“When people ask me which toys they should buy now for their potential future value, I always say stand outside of a toy shop and look for those toys where the kids are ripping the boxes open as soon as they step out of the door.

“What sells the best is often what becomes most valuable. Toys that are played with that often can go missing or not be in the best condition, so finding a mint version is few and far between. But that’s not to say they need to be boxed, as most ‘collectables’ are all the same,” John says. 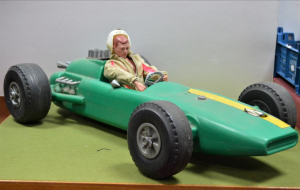 Growing up in the modern age of the 50s, children wanted tanks and soldiers to re-enact the war years. Yet peaceful figures started to appear in toy figure collections after the war, with the likes of astronauts, circus figures, animals and even ballerinas making up a large proportion of the collection at Sheffield Auction Gallery.

In the 60s and 70s, sci-fi and TV characters became more prevalent as Lone Star launched the first licensed toys such as James Bond, Dick Turpin and Batman and Robin.

“We had some really obscure pieces come to light in the collection, such as Fess Parker as Daniel Boone toy, complete with Indian war canoe.

“There was also a set of AA men which I’m sure kids would never have gotten excited about. Or a doctor and patient set that wouldn’t have kept them entertained over Christmas, never mind until Easter.”

Attracting a worldwide audience, the sale proved more popular than expected, with buyers flocking into to snap up a collectable figure or two from the thousands on offer. Along with the figures, the sale also brought to light a number of toys that would have found themselves in toy boxes of old once upon a time.

Bringing back childhood memories, there is no doubt the toy sales at Sheffield Auction Gallery resonate with so many people. And with any luck, the toys we get fed up of tripping over today will be worth more than a stubbed toe in the future.