Laying the foundations for a career discovering fossils

Since the dawn of Darwin’s time, humans have been on a quest of discovery to dig beneath the surface and uncover the ancestors of our natural history.

But for palaeontology student Emily Swaby, she’s hoping to unearth new finds and inspire a generation one fossil at a time.

Emily, from Wath, is currently one of only six females on her BSc Palaeontology degree at University of Portsmouth – one of the few dedicated palaeontology courses in the UK.

After finishing her second year with the highest overall grade on the course, Emily heads into her third and final year with two awards under her belt: The Paleontological Association Prize for best level 5 student, and the American Association of Stratigraphic Palynologists award for the highest mark in Micropalaeontology and Palaeobotany units.

While 20-year-old Emily currently spends most of her days studying the remains of prehistoric animals and plants under a microscope, piecing together their stories, just where did the idea to be a palaeontologist begin?

Crystallising the start of an interest

Thanks to a Spielberg science-fiction classic, landslides of people have struck up an interest or knowledge in at least one geologic period – the Jurassic. But aside from the adventures of two palaeontologists in a dinosaur theme park, the catalyst of Emily’s curiosity began when her grandparents bought her a set of rocks and minerals when she was ten.

Having always had an interest in history, these colourful crystals enticed her imagination of a whole new world. After her grandad passed away in 2010, the family went to Scarborough where Emily found her first fossil.

“The beach in Scarborough isn’t really good for fossils but I found this really insignificant shell. I thought it was the best thing in the world and I still have it today,” she says.

While at Scarborough, Emily met a man called Richard Widdowson who ran a coastal fossil shop called Gems; she brought a box of fossils with her and Richard spent the time identifying and labelling them, helping her understand where they might have come from.

“He’s sadly passed away since but he really inspired me to think I would love a job like his, encouraging children to become interested in fossils. If I ever find anything new to science, I’d name it after him.”

With her eyes firmly on the ground, Emily becomes detective, investigating the path of life forms from a distant past through a few rocky clues to understand how life began and has evolved over the years.

“I love how if you find a fossil hidden within a nodule, when you hit it open you’re the first person to ever see it.”

Growing up with a love of the geological world, Emily undertook her school work experience placement at Doncaster Museum and Art Gallery where she worked alongside renowned palaeontologist, Dean Lomax – the world’s leading expert on marine reptiles, specifically Ichthyosaurs.

Only in his late 20s himself, Dean encouraged Emily to weather the long education path ahead and get experience out into the field to ready her for a very competitive career.

“When I met Dean, he introduced me to Fizzy, an Ichthyosaur who had been hiding in the museum’s 12,000 specimen collections since the 1910s. They thought it was a plaster cast but Dean told me how he spent five years researching to discover it was actually a real fossil, and a new species that he’d uncovered.

“It was from here that I knew I wanted to do this job. He encouraged me to start writing and I’ve had three articles published in palaeontology magazines, even one in America.”

After school, Emily attended Thomas Rotherham College where she studied Geology, Geography, History and Applied Science and an Extended Project Qualification (EPQ) ; she left with amazing grades of DS*AABB, gaining the University of Leeds Geology Prize for being the only student to gain an A in geology.

Emily also won a Young Darwin Scholarship in 2014 through the Fields Study Council where she had the opportunity to go back to the birthplace of natural history on a residential to Darwin’s home in Preston Montford.

Her time at TRC laid the foundations for her commitment to the field, taking part in expeditions and trips away for geology digs.

“On one trip for Geology, we were walking back to the minibus when I saw a small rock with a slight pattern on it. I dug it up and it was huge, but covered in mud. I cleaned it up when I got home and it was a fossil coral known as Favosites – even my tutor didn’t realise what it was at first.”

While many people probably think of palaeontologists as dinosaur hunters, the industry is a complex and varied discipline with a scientific epicentre.

“We started university with 50 people on the course but there are now less than 20. Many quickly realised it was harder than they thought and that it’s not all about dinosaurs – we even have to study fossilised pollen.” 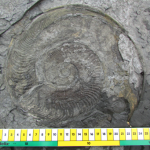 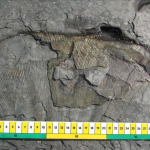 Before her final year begins this September, Emily has spent her summer weeks carrying out dissertation fieldwork where she is looking at ammonites on the North Yorkshire Coast.

“During my project, I’m investigating why the ammonites died, whether by natural death or predation, and what minerals replaced them during the fossilisation process and why.”

With the rocks at Whitby thought to be around 180 million years old, Emily and her parents spent weeks searching various beaches along the coastline looking for fossils.

“I’ve got them well trained in what to look for. They even cancelled their summer cruise to help me. . I also often go fossil collecting with my partner Jacob. We met at college but he’s gone on to study Geology at Derby University.

“He’s the expert on minerals, but anything fossil related – I’ve got this.”

After university, Emily hopes to visit the Wyoming Dinosaur Centre in America and gain hands-on palaeontological experience with the largest and most unique fossil collections in the world.

“More than anything, I’d love to teach and share my enthusiasm. My dad is a teaching assistant at Wath C of E Primary School and I’ve visited his classes a few times to talk about fossils during their rocks and minerals topic. The children absolutely love it and I’ve even inspired a few budding palaeontologists there.”