Not last orders just yet for Clubland

Stitched into the fabric of community life, in their heydays, working men’s clubs were at the centre of working class culture as families flocked in search of reprieve from the throes of everyday life.

Hundreds queued out onto the street, eager to sign in at the door and snap up their usual spot in the concert room. The stage’s claret red curtains drawn while the turn prepared in the dressing room, the concert chairman sat in his box organising the night.

Not just beer and bingo, clubland was an ongoing tradition, with each generation renewing their membership card and with it retaining the camaraderie that was built by the bar.

For many clubs, the bar’s shutters have come down, the microphone gone silent and the last bingo numbers drawn as dwindling membership has called time at the bar for good. 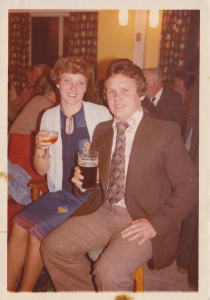 David and his wife Anne

In Rotherham, David Stainrod has seen the highs and lows of clubland, celebrating 40 years on the committee at Albion Road WMC this year and in line to receive a distinguished service medal from the Club and Institute Union.

Unlike most young lads, David didn’t get his club membership card for his 18th birthday; his father, Harold, preferred a pint in the pubs so venturing to the club wasn’t custom in the Stainrod household. Instead, Dave joined Rotherham Trades once 18.

Working men’s clubs were built as social clubs in industrial areas, with miners and steel workers that once forged South Yorkshire clocking off and signing in after a shift at work.

After moving into the town centre in the late 60s, Dave joined as a member of the Albion on the next street in 1976.

“Our house backed onto the club car park so, instead of walking round, I’d jump over the wall to go for a drink with some of the work lads from British Steel. It was like an extended living room,” he says.

As a full member, you have access to cheaper beer and free entertainment most nights, being allowed entry to any other affiliated club in Britain for just £5.50 membership per year at present. 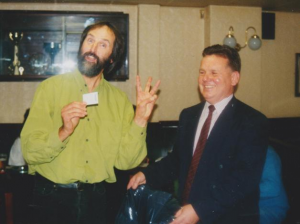 n the mid 70s, Albion Road had around 1,400 men and 300 women on the books. By 2000, numbers were about 1,400 in total, with 600 members today. But clubland has always been a generation game; as lifelong members die out, young people’s social scenes are no longer the same as their parents or grandparents.

Yet, thanks to the perseverance and dedication of the committee – or A Team as Dave calls them – the Albion still continues to draw people in each week to bingo Thursdays or their four live music nights.

“We’re only a little club and bigger than us have shut. If it wasn’t for the six committee members who run the club we would be another added to the list of closures.”

For David, he’d never dreamed of running a club; he worked three shifts at Steelos and had two young daughters to raise. But in 1977, he was persuaded to join the then 17-strong committee after many members left or retired at the same time.

“They wanted some young blood, I was 31 at the time. I asked my wife Anne if I should or could. She said do what you want, I won’t stop you. She probably regrets saying that now.”

After two years on the committee, David became secretary age 33, the youngest to be elected. In those early days, being a committee man was a hobby yet in the past 40 years, Dave’s role has become more like a full time job.

“It’s a huge responsibility. I have to sort the VAT, staff wages, stock take, subs on a night plus organising the acts we have each week through our agent. If I didn’t have Anne I don’t know what I’d do as most of it is done online – I’m 71 now and not up to speed with technology.”

Most people have a vision of clubland entertainment – the good, the bad and the downright funny. But a concert secretary’s role of booking the acts could make or break a week’s takings if the crowds weren’t impressed with the choice. 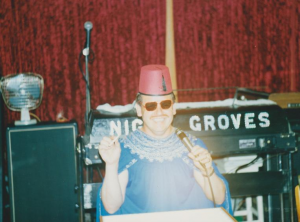 Luckily for David, the Albion has become renowned for its fantastic turns, welcoming the likes of Rotherham’s Paul Shane, Lynne Perry, Duggie Brown. Alvin Stardust and Englebert Humperdink performed as Shane Fenton and Jerry Dorsey, and Jane MacDonald said the club’s organist and drummer, Gary and Nigel, were the best she’d sung with.

Memories remain of the children’s talent shows and fancy dress contests where every entrant received £1 even if they had a bin liner on or forgot the words. 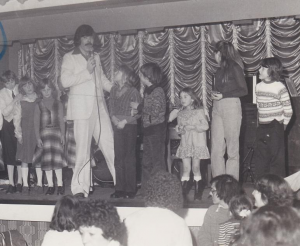 “When I was a committee man, I always loved the concert chairman’s job, announcing the acts and calling the bingo. Each Christmas, we’d get up on stage and sing. My song was Green, Green Grass and the others would run outside and cut grass to throw over me.”

David was also the player manager for the senior football team which folded in 1997.

“I said I was packing in at 40 but ended up playing my last match at 51 due to decreasing players.”

Seems like Dave just can’t say no; his retirement notice has been up on the board since 2010.

While the days of the fishing club, cricket squad, bowling team and three snooker teams are long gone, the committee still organise the Christmas pantomime and annual seaside trip where members’ children are given pop, crisps and spending money paid for by the tote profits.

Since the 70s, beer prices have gone up about 50 percent but weekly takings have dropped by half. Running costs are approximately £3,000 a week with wage bills, rates and acts but negotiating deals with the breweries has meant the club is doing well financially.

“I don’t want to walk away and let it crumble now we’re back on our feet again but we need some new people who would put as much heart and soul into this place as we have. If nobody wants to take over from us as we leave or retire, we may have to close.

“I’d just like to whole heartedly thank all my club friends past and present for continuing to support us over the years and hope to be seeing you in the Albion for years to come – hopefully when I’ve retired and can enjoy a pint myself.”