One man’s junk is NOT another man’s treasure

We met the Rawmarsh and Parkgate Friends of Green Spaces to find out more about their clean up mission.

When you live in an urban town such as ours, it is refreshing to see green open spaces that brighten up the bustling environment. Then your heart sinks at the sight of debris, litter and rubbish that is aimlessly blighting these surroundings. 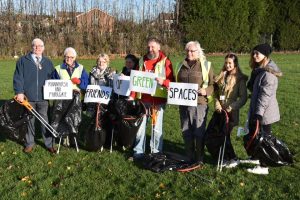 Littering and fly-tipping are becoming growing concerns that we can’t seem to escape; wherever in South Yorkshire you live you will probably see empty food packets, cigarette butts, cans and even household items congregating  in the green spaces around your village.

You’ll know all too well the feeling of annoyance at seeing a pile of unsightly rubbish left in lay-bys when driving down country lanes.

Having become exasperated by rubbish being dumped near his home in Rawmarsh, John Wright has joined forces with two local councillors and like-minded
volunteers on a quest to tidy up areas and make a difference around Rawmarsh and Parkgate.

Living near the Warren Vale recycling centre over the last 40 years, John has seen a rise in the amount of waste dumped by people when the centre is closed or if their vehicle isn’t allowed entry. Rubbish is constantly emptied on pavements, roads and embankments for someone else to deal with.

Although he was in regular contact with the council, the sheer volume of litter around meant that the council couldn’t physically remove it all.

Large items such as fridges and TVs were collected fairly quickly if they were easy to reach; others in difficult positions such as down bankings or covered in leaves would be left to rust and decay which in turn encouraged more dumping.

General rubbish and litter began to pile up, especially in hedge bottoms and hard-to-reach areas.

Litter costs the UK taxpayer around £850million a year – that’s a lot of money to throw away on cleaning up someone else’s junk.

Behaviour needs to change fast before we’re all drowning in a sea of coffee cups, carpets and car parts.

With the help of Rawmarsh Councillors Bob Bird and Dave Sheppard the Rawmarsh and Parkgate Friends of Green Spaces was launched last spring to finally
take a stand against litter and instil a sense of pride back into the area. 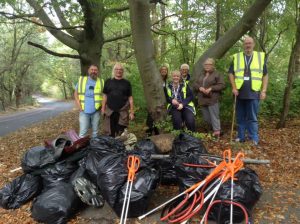 All of the volunteers are from different backgrounds and litter pick alongside Bob and Dave who join the group each week.

The group meets every Friday morning and spend a couple of hours litter picking in the area, filling black sacks which are then collected by the Streetpride van at an arranged location. From the country lanes at Upper Haugh down to the retail parks at Parkgate, the team work hard week in week out on a clean-up mission.

Although there are often only six or seven volunteers, in just six months from May to December last year the group collected 1,200 bags of other people’s rubbish. And the
number keeps rising.

Along with black bin liners, the team have cleared a variety of larger household items such as old TVs and music systems, fridges and freezers, even a three piece
bathroom suite. Worn tyres, bike frames and traffic cones have also been found.

Having recently gained charitable status, they can now apply for funding to buy equipment such as high-vis vests and litter pickers. They have also installed CCTV and floodlighting at the Warren Vale recycling centre entrance which has seen a reduction in fly-tipping over the recent months. 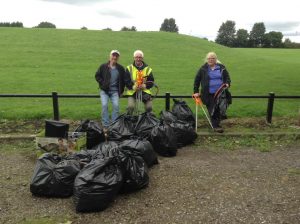 Yet there is still a need for the group.

Nobody enjoys picking waste up and the group wish people were more responsible so that they didn’t have to. But they’d rather volunteer than see the area they call home
become one big landfill site.

Rawmarsh and Parkgate Friends of Green Spaces meet monthly at Rawmarsh Library on Barbers Avenue where they discuss the areas which need clearing most
during the upcoming weeks.

They welcome people to join them at their meetings to contribute both time and suggested areas and are hoping to increase numbers so they can continue working in the
future – if need be.

By getting out and about in the community and tackling the problem at hand, Rawmarsh and Parkgate Friends of Green Spaces are selflessly giving their time to changing the selfish actions of others for the benefit of us all.

Getting to grips with garden design

Wath: Queen of the villages, King of the festival