Wine is sunlight held together by water – Galileo, the father of modern science once quirked.

A part of life and culture since time began, wine has evolved and matured over time, with an endless array of varieties now at our disposal.

While we savour what’s in the glass, many of us have become stuck in a wine rut: attached to our favourite bottle or brand since our early twenties when the taste first pleased the palate; grabbing the closest bottle on offer in the supermarket because we like the label; or getting a headache navigating the wine menu in a restaurant.

For those who like wine but want to fill their glass with knowledge or be adventurous with their wines and try something new, the Fitzwilliam Wine Club has been improving the wine interest of local people over the age of 25 for the last three decades.

Established in 1985, the club originally had two venues, today, meeting at Whiston Parish Hall on the third Thursday of every month.

The Fitzwilliam Wine Club members are joined by guest speakers such as local wine merchants, each bringing around seven wine choices. Some events are themed, based around country or grape variety, whereas others bring an eclectic mix of wines from all over the world.

Mainly red and white varieties, with sparkling sometimes added into the mix, the bottles vary in price with cheaper finds combined with those stretching over the £20 mark. Each member receives a raffle ticket on entry with the chance to win the leftover wines to take home.

What’s on the wine menu? 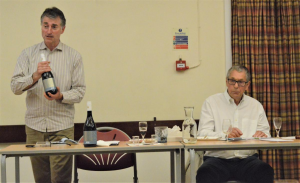 After being invited to join them one meeting, we settled down for an evening of both education and pleasure, with guest speaker Barry Starmore at the helm.

Although presenting wines to enthusiasts can be a challenge, wanting to bring new tastes to defy the norm, the tasting agenda on offer was structured and critical, with in-depth analysis of each wine’s origins and quirks, plus personal stories of each vineyard.

For the first wine, a Portuguese white from near the Spanish border, Barry brought along the cork tree bark to explain how the winery made their own corks. Other wines on offer were a 2008 red Syrah from Umbria, a white blend of sauvignon and chardonnay, with a few surprises and experiments in the mix.

Although not top of the go-to list of countries, English vineyards are getting stronger in recent years. Members had to guess a light, blush-coloured pinot noir’s origins which were indeed Sussex. The most expensive wine of the night, its high acidity levels from the fluctuating climate here in Britain meant that most were left reeling with sour grapes.

Along with how to chill whites or how long to decanter reds, advice is given on how to view, smell and taste the wines, dispelling any uncertain attitudes to wine by looking at what aspects bring pleasure.

Tips on food pairings are often given; an oily white working best with fish or poultry, a deep red great with cheese. Members are encouraged to bring their own nibbles to eat with the wines.

More than just the taste

The speaker may also look at the maturity of the vines and how the climate of where it’s grown affects the wine. At the tasting we attended, a Chilean pinot noir from Santiago came from a large winery close to the sea, with the sea mist giving the wine a distinct peppery taste. 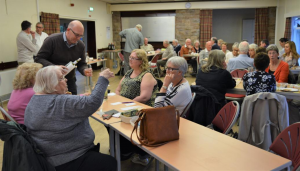 Showing his breadth of knowledge and expertise, the oenology, or science of wine, heavily influenced Barry’s talk. It was intriguing to hear the different processes involved and made me appreciate that simplistic bottle just a little bit more than how it tasted.

Finishing off with a digestive, a sweet Muscatel from Lisbon, this 17 percent sweet wine was fortified with brandy – a charming end to the evening.

The Fitzwilliam Wine Club has around 36 members but are always looking for fellow wine lovers to join them.

Many have been members for around ten years, but some, such as club stalwart Moira and speaker finder David Clay, have been there since the very first meeting. Some, such as Tessa, Hugh and wife Judy, have been coming for over 20 years, while others are more recent members.

No matter how long their service, all have a shared love of wine.

They know what they like and what they don’t like, yet some want to sample new wines without buying the bottle. Some can describe and discuss the hidden notes of the wine while others just enjoy the taste. And many just enjoy the company that comes with being part of a wine tasting club.

What better way to spend an evening than by talking about and tasting wine with the Fitzwilliam Wine Club.