Ray Matthews: Inspiring a nation one step at a time 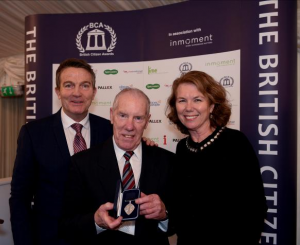 Going that extra mile to put Rotherham firmly on the map, marathon man Ray Matthews is continuing on in his philanthropic mission even after reaching the finish line of his miraculous feat.

Last year, Ray set himself a personal challenge to tackle 75 marathons in 75 days at the age of 75 to raise money for Newman School in Whiston. His task propelled both his name and that of the school, captivating an audience much further than just his hometown of Rotherham.

Since finishing his last marathon in September, Ray has become a patron for unsung heroes in our area using his newfound platform to keep pushing the importance of his fundraising efforts, which are currently sitting at just over £30,000.

Inspiring a nation, it was great to hear from Ray – when we finally caught up with him – that his journey since the marathons has seen people from across the region contacting him for many different reasons.

“I didn’t know how I would cope afterwards as being in the spotlight isn’t normally me at all. But I knew I had to make full use of whatever would come with the marathons.

“I’ve had people tell me my story has motivated them to do this and that. Some have asked me to give talks at meetings or events which sparked that side up again. And others have wanted to help with the next task of creating the specialist playground at Newman,” he says.

Since meeting him during his challenge and once again afterwards, the change in his confidence is clear to see, yet still the humble lad from Maltby who just wants to make a difference to the kids at Newman School.

Setting the pace for community involvement in Rotherham, Ray has been awarded the British Citizen Award in January at an intimate ceremony in the Palace of Westminster.

“There was only 29 people invited from across the country, all who had been nominated for their achievements. Nobody could believe what I’d done, even patron Bradley Walsh shed a tear at the story behind the marathons.”

On track to gain further acclaim, Ray is now competing against Olympians Hannah Cockcroft and the Brownlee brothers in the Yorkshire Choice Awards this April.

Nominated for two awards, local fundraiser and sporting achievement, the ceremony at Leeds’ Elland Road Stadium will see a host of well-deserved battle it out for the top spot.

Finishing off a golden year, Ray has also recently been appointed ambassador for Age UK Rotherham, becoming champion for both those in their prime years as well as the young kids at Newman.

“I hate to see loneliness in old age and I’m hoping to work with Age UK to try and cut it out by getting people motivated to get out more and involve themselves in the wider community.”

Helping to organise the first Love Later Life Run, Ray is proof that his efforts within the town aren’t just a sprint towards one cause, but will continue to go the distance for many years to come.

For more details of Age UK’s Love Later Life event coming to Rotherham this May, visit their website or see our events page.