At Heather Garth Primary Academy in Bolton-upon-Dearne, the children sit at their desks as quietly as hush puppies as a new member of staff roams the halls in search of Stars of the Week. With tight black curls, a gleam in her eye, but four legs instead of two, this employee is a real teacher’s pet.

No, we aren’t barking up the wrong tree – we’re talking about Star, the Bedlington terrier pup who is South Yorkshire’s first working school dog.

A classroom canine, Star is a fully fledged member of staff at Heather Garth who is currently in teacher training to support lessons.

Stemming from a job swap with an American school, the idea to have a service dog in school came a few years ago when an exchange teacher brought along her dog which had been trained to read with children.

Over the last decade, working dogs have become more popular in UK schools, particularly in Devon and Cornwall, where teachers are seeing literacy skills improving amongst various ages from having a so-called dogsbody helping them in classes.

The head of Heather Garth since February, Jayne Winnard originally broached the idea of a school dog during her interview, with Star introduced to the school during the summer term.

Earlier in the year, one student won an art competition to design an eco bag, with the school deciding to spend the £500 prize money on a school dog.

Following lots of research, they chose a Bedlington terrier because of their temperament. Mild-mannered, calm and quiet with a little lamb appearance, they are noted to be good around children and families with the intelligence to be able to adapt to training.

The children voted for the name Star, chosen after the school emblem, and she has settled into her school duties and is quickly rising to the top of the class.

While the children have adapted well to seeing Star around school, the long-term aim is to train her to be an attending dog with educational benefits such as listening to the children read. 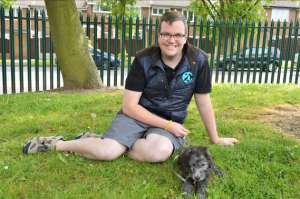 During the 18 month process to being a service dog, Star will be guided by fully qualified animal and behaviourist trainer, Dan Pearson, who runs The Animal Training Academy in Rotherham.

Dan has been working with Star for three days a week since she was eight weeks old and has already seen a positive change in her over the past couple of months.

“Having been on board since day one when the idea of Star was born, it’s been easier to unpick any bad puppy habits that she may have picked up in the earlier stages of her development.

“Training her will be a complex process, but we’re keeping a daily diary to see how she progresses at each stage such as establishing a bond with the kids or working with the reading mat,” Dan says.

Starting with general obedience, Dan has trained Star to listen to basic commands and has currently introduced her to children of different ages who have been helping with her training.

Training takes place throughout school including on a reading mat where Star knows is the place she needs to be listening to those around her.

After she’s mastered commands, Dan will then begin training Star to listen while the children read their favourite books to her, with plans for her to then become a therapy dog to help the most vulnerable or those with learning difficulties.

“Having Star to read to will help the kids build their confidence when speaking out loud. Dogs are non-judgemental, therefore Star won’t laugh if they stumble a little or criticise if they take their time. The children learn to be in control and having a dog to read to makes it fun again – even the most reluctant will want to be involved.

“Plus, everyone wants to love their job, even dogs, so we want Star to find it enjoyable, too,” Dan says.

Around school, the atmosphere is quieter with the children understanding that, still a little puppy, Star needs a calm working environment.

The children are responding positively to Star and they are learning there are expectations and rules to follow before they’re allowed to stroke her, such as asking first. This in turn will improve their dog safety awareness when out in public if an unknown dog comes over wagging their tail – they may look cute and cuddly but you can never fully know their temperament.

Having Star around also teaches responsibility, with the children applying to take her on walks. 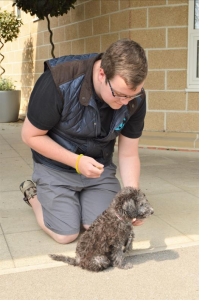 While improving their relationships with each other and their teachers, Star’s residence in school has also motivated children in other ways. It’s encouraged them to think about topics they’re interested in, motivated those with poorer attention spans, and attendance has improved through wanting to see her every day.

Training for Star also includes social and distraction tasks; while the children can look at her when she enters the classroom, they need to remember she has a job to do like any other member of staff and that her presence shouldn’t cause distractions. This teaches Star that not everyone she meets wants to fuss her or say hello.

So far, Mrs Winnard says the entire school, made up of 260 children aged three to 11, has been great with Star, taking ownership of her as if she were their own.

“Before she came, we set the children tasks in their learning based around Bedlington terriers. They created fact files and dog-based artworks and they’ve all been really enthusiastic to learn more. Some have even given me tips for her diet for when she’s on her lunch break.”

After a long day at work, Star heads home with Mrs Winnard where she gets to put her paws up after less marking, more barking.