A poignant and momentous anniversary, commemorations of 100 years since the Great War ended will resonate across the globe this November; people will be flocking in their hundreds of thousands to see the graves overseas, laying tribute to the fallen and celebrating those who serve today. 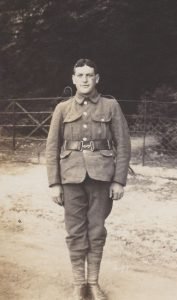 But for Rosemary Guerrant and her brother Nicholas Kennedy, this Remembrance Day will be just like any other day, month or year that passes as they seek to keep their great uncle Frank Glasby’s memory alive.

Like many families touched by the devastating effects of the war, Rosemary and Nicholas grew up listening to fond memories of their uncle Frank; his younger sister, their grandmother Evelyn, would often recall happier, innocent days of their childhood before conflict and tragedy struck.

War was never forgotten or hushed away behind a cloud of grief in the Glasby household. Frank’s death penny hung pride of place on the living room wall enclosed by a wreath.

Well-thumbed postcards from his time in training camps and service overseas still remain, his short, simple and often sombre hand-written messages read frequently. One, addressed to his sister Evelyn, tells her to save the chocolate until he gets home. Sadly, she never got to share it with him. 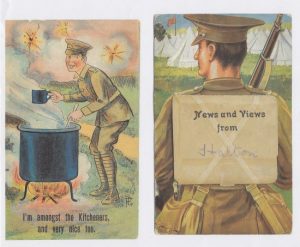 The whole family have paid regular visits to his French grave at Gordon Dump Cemetery, Ovillers-la-Boisselle and they send a wreath every year; Rosemary still has the train ticket from when Frank’s mother Alice first visited in 1922.

Even up until her own death in 1943, Alice was never bitter about her son’s death. At the many memorials and ceremonies she attended, people would ask if she’d like to spit in the faces of the men who sent her boy to war.

Every time she replied the same. No, as they too were somebody’s son.

Frank, born in June 1892, was one of Alice and her husband Henry’s five children. The family lived on Dunlop Street in Carbrook, Sheffield.

Before the war, Frank worked in the steelworks making cores. His older brother, John Arthur, was a file maker at Spencers of Carbrook having gained an apprenticeship there aged 12.

Both would go on to fight for their country, but only one would return.

When Secretary of State for War, Herbert Kitchener, called for 500,000 recruits for his New Army, Frank and John were part of the 2.5million men who volunteered their service.

John had a brief spell with the Durham Light Infantry but was sent back from France in 1915 to rejoin his trade, with officials deciding he could best serve his country by continuing to make hand-cut scalpels and tools for the troops.

On 10th September 1914, just a handful of weeks after the outbreak of war, younger brother Frank joined the King’s Own Yorkshire Light Infantry 9th battalion with his friend William Giles. The pair was dispatched for basic training at Pontefract before heading to Berkhamstead and subsequently Halton Park.

“It’s funny because my great grandmother never allowed Frank to join the cubs or the boy scouts as she always presumed if war ever broke out, they would be the first to be called up,” Rosemary says.

After a year of training, Frank and his company were posted to France. The KOYLI 9th was part of the 64th Brigade: 21st Division, an infantry which was involved in the poison gas attack of the Battle of Loos of September 1915. 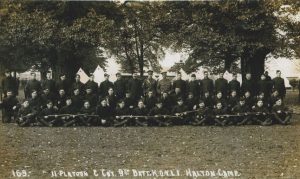 Shortly afterwards, Frank transferred to the 64th Company Machine Gun Corps, a company born for war and one of the first to use tanks in combat.

Although the reason for him joining the MGC is unknown, with Rosemary presuming it being down to the job warranting better pay, Frank would have needed to have been very intelligent and skilled, particularly in trigonometry and calculus.

The Machine Gun Corps stayed with the 21st Division on the Western Front and were heavily involved in the Battle of Somme – one of the war’s bloodiest battles which killed or wounded one million men over the 140-day conflict.

There were 72 men from that company wounded on the Somme’s opening day; 14 fatally, including Frank.

Due to the sheer volume of casualties, his mother Alice wasn’t actually formally told of his death via confirmation letter until 21st September 1916 – almost 12 weeks after he had been killed in action. Replying to an enquiry from Alice on 8th August, the government officials said Frank was just presumed missing and so the family lived in hope. 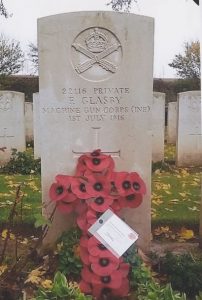 Could we have raised his dying head,

Or heard his last farewell,

The grief would not have been so hard,

For those who loved him well.

Oh, for the touch of a vanished hand,

And the sound of a voice that is still.

Now, over 100 years on since his death, Frank still lives on in the memories of Rosemary, Nicholas and their families and his story even inspired Rosemary to join the forces herself. When the inevitable sadly happens, she has requested his name be inscribed on her gravestone.