Tears in the Dust for actor Dean Sills

In the blink of an eye, life can be flipped on its head and everything we’ve built pulled from underneath us. 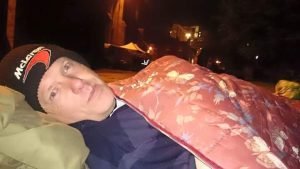 That is the strong message being portrayed in Steve Call’s new film, Tears in the Dust.

Starring local Bolton-upon-Dearne actor, Dean Sills, Tears in the Dust follows lead character Trevor Wallis as his life suddenly crumbles and he finds himself sleeping rough on the streets.

Trevor, played by Dean, is a successful salesman for a software company whose destructive boss causes him to lose his job, wife and dignity – he turns to drink to numb his losses and his life spirals out of control until he finds himself homeless.

Written and directed by Steve, the film highlights the prevalence of homeless in today’s society and how it can happen to anyone. Through speaking to people on our streets and hearing their stories, Steve hopes to shed a new light on the crisis and reduce the stigma surrounding those sleeping rough.

Both Steve and Dean spent a night out on the cold streets of Leeds with West Yorkshire charity, Simon on the Streets who provide front-line support to rough sleepers in need.

“It really opened my eyes to the shocking reasons behind why some of these guys ended up in their situation. It’s not always just about addiction, some had been through severe abuse or domestic violence which caused them to flee their homes,” Dean says. 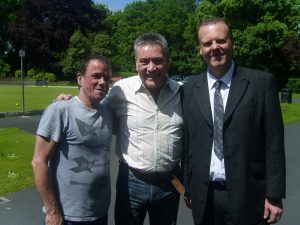 Filmed in Bradford, Sheffield and the Collingwood pub in Bolton-upon-Dearne, Tears in the Dust also stars Kuljit Singh and Jessie Joan Bannon with a cameo by comedian, Billy Pearce.

Tears in the Dust follows on from the success of the pair’s last series, Up North; a low-budget comedy about two very different families separated by a garden fence which also starred Billy Pearce and Bernie Clifton. 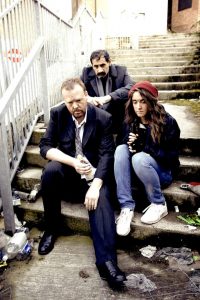 The gritty drama was released on DVD in March and is available to stream in 13 countries. From Monday 21st May, it will also be turned into five 20 minute episodes thanks to local TV channel, Sheffield Live!

All of the profits made from sales of Tears in the Dust in the first 12 months will be donated to homelessness charity Hidden Voices, whose founder Gary Stainforth supported and even appeared in the film.

Tears in the Dust marks yet another independent production added to Dean’s resume and he is currently planning a future film based on human trafficking in the wake of the Rotherham CSE investigation.

“I’ve done lots of horror and zombie films in the past as that’s where I started acting so it’s great to be given the chance to do a real story. I’m not in this game for the money or the fame, it really is simply my passion and I keep on auditioning and trying to get more roles,” Dean says.

Tears in the Dust starts Monday 21st May at 9.30pm on Sheffield Live! – Freeview channel 7 or Virgin channel 159. Alternatively, you can stream it online at www.sheffieldlive.org.tv

Getting to grips with garden design

Next
Homes and Gardens
Read more

Gardening: Back to basics with borders