The importance of screening

A few weeks ago, I was sat in my doctors’ waiting room waiting to be called when I couldn’t help but overhear two ladies in front of me talking loudly.

“I had that through post other day. Screening,” one of them said. The other grimaced in horror.

“I just chucked it straight in bin.”

Although trivial, it is becoming all too apparent that many others in this area are also ignoring their letters about cervical and breast screening tests, with one in five women in South Yorkshire still not taking up their invitations.

Whether it’s the fear of the unknown, feeling embarrassed during the test, or a bad experience in the past, many women continue to put off their smear tests and mammograms and are putting their lives at risk.

Often misconstrued, cervical screening is not a test for cancer. Perhaps thinking of the C-word fills many with dread.

But whilst screening can help prevent 75% of cervical cancers, the main focus is to detect abnormal cells in the cervix that could later develop into cancer.

All women between the ages of 25 and 64 are regularly invited to be screened; if you’re aged between 25 and 49, you’ll receive a letter every three years, and if you’re aged 50 to 64, its every five years.

For anyone over 65, cervical screening isn’t mandatory, but you can ask your doctor to refer you for an appointment if you haven’t had one since you were 50, or if you’ve had recent abnormal tests.

When the letter fell on my door mat a couple of months ago, I too was horrified that: a, I was actually nearly 25, and b, I had to suck it up, get it booked and get it done.

Although I was a bit panicky beforehand, I was surprised when the nurse said it was all over and I was back on my way to work just five minutes after. The embarrassment was over before I’d even left the room.

The practice nurses who often carry out the test will make sure even the most nervous of ladies are relaxed and settled, talking them through the process.

Following the tests, only five percent of women need follow up tests, with the majority of women needing no further action.

If you’re recalled, don’t panic. The test might not have shown up properly, although they are more reliable than ever before. Cervical screening is there to notice any changes before they become a problem.

For Barnsley photographer, Adele Haywood, she was one of the minority whose test detected abnormalities in her cervix, despite having no signs or symptoms. After receiving treatment at 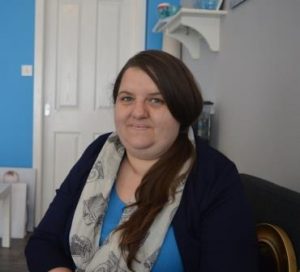 Barnsley Hospital, 25-year-old Adele has since received the all-clear.

She said: “I was worried when I received my results showing that abnormal cells had been picked up. However, I was reassured by the fact that the cells were precancerous and that they had been picked up early which meant that they could be treated before they became cancerous.”

Cervical cancer is rare, and makes up less than one percent of all cancer cases, due in part to the positive results from cervical screening which catches and treats problems in the early stages.

However, breast cancer is the most common type in women, with one in eight women being diagnosed at one stage in their lives. Yet, more and more women are ignoring their routine mammogram appointments.

Women aged 50 to 70 are invited every three years, with some areas trialling a wider age bracket of 47 to 55.

Breast screening is an important way of detecting breast cancer, allowing for early diagnosis and prompter treatment and often pick up things we wouldn’t usually be able to notice ourselves.

Again, breast screening checks for abnormalities using minimal radiation, picking up areas that are too small to see or feel.

One in 25 women will be called back, but this doesn’t mean the test has detected cancer. The results may not have shown up properly and the mammogram may have to be more thorough.

The South Yorkshire and Bassettlaw screening team are encouraging all eligible women not fear the smear or mammogram and take up their appointments, highlighting the importance of such tests.

If you would like more information on the screening process or would like to reschedule your appointment, please telephone the clinic on 01226 432100 if you live in Barnsley, or 01709 424807 if you live in Rotherham.

For more information about cervical screening and tips on how to prepare for your appointment visit: fearorsmear.dbh.nhs.uk