With mining roots of coal and grit, from the cloud of dust a dynamic sound has emerged, enveloping audiences far and wide in a soothing trance unlike any other. They call it the Thurnscoe Sound.

For over 90 years, the Thurnscoe Harmonic Male Voice Choir has continued to excel in concerts and competitions across the world, their melodious sound echoing through the memories of both its members and listeners.

Back in 1924, Thurnscoe was a thriving community; people flocked in search of work down one of the many collieries in the area. A village built on strong foundations of community spirit, the population rallied round to help one another.

When the local church needed restoring, the congregation were thankful to a visiting male voice choir who agreed to perform to help raise funds for the church.

Sitting in the congregation, many of the local miners gathered in awe of these rough looking lads, they too fellow miners, who despite their rugged appearance, could produce the most beautiful sounds, their hymns and songs overwhelmingly expressive.

Inspired by the visiting choir, a committee of men from the pit gathered together one September evening in ’24 with the hope to emulate the choir they’d heard and start their very own with colleagues from the mines.

Since its inception, Thurnscoe Harmonic Male Voice Choir, as it was named, has become a force to be reckoned with within the choir scene, picking up over 100 prizes in major competitions over its 90-year history.

Early into its birth, the founding members of the choir set the bar high, coming in two points behind the winners at their very first competition, the Cleethorpes Festival, six months after starting out.

In the summer of 1925, the choir entered their second competition, the Brodsworth Music Festival in Doncaster. Up against four well-established choirs, the newcomers took home the top spot, elated with their standing ovation from the crowd.

The choir quickly earned a hardy reputation, their tone and sound becoming the envy of many fellow male voice choirs. Their success led to an increase in members wanting to be a part of the glorious Thurnscoe Sound.

After a hiatus during the Second World War, the choir began to sing together again in 1946, with many new faces joining the ranks.

One of the choir’s longest-serving members, Fred joined just after the war in his early 20s. A miner, Fred and a few of his work pals were having a sing-song one shift, when his colleague Horace Spade asked him if he’d ever thought of joining Thurnscoe Choir.

Horace persisted, asking Fred if he could sing Bless This House, to which Fred replied, only if he’d got to.

After much deliberation, Fred decided to give it a try and auditioned.

“When I went, all the lads were coming up to the rehearsal room ready for practice. I wasn’t nervous, but I was frightened to death. I was afraid I’d make a mess of it, but I didn’t. I got a pat on the back and a well done,” he says.

Back then, almost all of the members were miners, with just the one who worked on the railways.

The majority were born and bred in Thurnscoe. Sons followed in their father’s footsteps; brothers came to sing together; uncles, nephews and even grandfathers, all performing as one.

Growing up in the village, her father and brother members, Irene Hill joined the choir in the 50s after being asked by the choir’s conductor and founding member, Ernest Smith.

His daughter Mary had long accompanied him, but she needed some help with the duties. As the super intendent of the Methodist church, Mr Smith had known Irene and her family for many years.

“He asked me if I could learn to play the organ to help Mary. I was only 13 when I joined. I went with my brother, our Jack, or Nip as the others call him. It was nerve-wracking that first time walking into the Thurnscoe Hotel surrounded by all these men. But I soon settled in,” Irene says.

After over 30 years of service, Mr Smith resigned due to ill health. Mary took over as musical director, with Irene becoming the lead accompanist aged 17, a role she has held ever since.

“I wish being in a choir would become the ‘in-thing’ again. It played a big part in the community in those early days. When we joined, there was nowhere else to go. Families went, both kids and adults. I grew up with the choir,” she says.

“She is the choir. We couldn’t manage without her,” Fred says, wholeheartedly.

Their sternest critic for over 65 years, Irene might be the only woman in the choir, but I am told she keeps them all in check.

With her late husband Eric, the secretary and treasurer of the choir, the couple were pivotal to its smooth running. Eric was also a serving member of the RAF, so the couple were sorely missed when he was away on national service.

After Mary left the choir to start a family, a new MD was appointed in the early 60s, with Colin Leech taking the role of conductor for over 45 years.

Along with Irene, Colin transformed the already astounding choir into an A-class harmony group, with his mantra to never sing louder than beautiful still ringing true today.

During his first few years of directorship, Colin led the choir to 13 consecutive first prizes in one year, making them difficult to beat in both concert and competition.

Members from other local choirs noticed Thurnscoe once again.

Another long-standing member, Cal joined Thurnscoe in 1974 after singing with them at the Mass Voice Choir in Sheffield. As part of the Mexborough Choir, Cal and his fellow singers were invited by Thurnscoe to rehearse for the event.

“What they had was entirely different to anything I was used to. They had 80 voices, whereas Mexborough had around 20. I was so blown away, I asked if they’d mind if I kept on coming to practice,” Cal says.

From the late 1970s, the choir began to travel farer and wider, taking part in competitions in Wales, Belfast, Ireland and the Isle of Man. 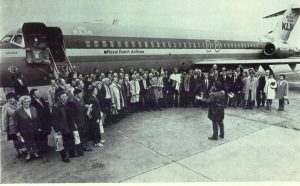 After a competition in Aberystwyth, around a dozen Thurnscoe lads were out on a boating lake, their singing rippling out across the water. People around the lake were commenting how good they sounded and couldn’t believe they were indeed from Yorkshire and not Welsh.

They have still never had a Welsh choir beat them.

Although known for their repertoire of opera, sacred and spiritual songs, their stand out ‘party piece’ is always the Owl and the Pussycat, which once earned them a 15 minute standing ovation at Llangollan Music Festival.

A light-hearted song purely for the audience’s entertainment, the choir have created their own music for Edward Lear’s classic poem, which has been their one chance to bend the rules for a memorable performance.

Finishing off with the song at a competition on the Isle of Man in 1979, a choir member took to the stage with a plastic pig snout, complete with a ring on the end of it. Pulling faces at the audience, the song choice was comedy gold, with an Irish choir asking what music they’d used for it.

“I told them we didn’t have it, I’d just made it up and it stuck,” Irene says.

After passing into international waters, the choir started taking their voices global, competing across the world in the likes of Malta, Holland and Austria.

During a competition in Heidelberg, Germany in 1979, the choir had to sing in German, with the judges commenting how the Thurnscoe lads had better diction that the German choirs.

“We won that competition, which after two World Wars was just the icing on the cake,” Fred says.

Along with international fame, the choir also hit the bright lights of TV, performing on shows like Stars on Sunday during the 1970s.

For those old enough to remember it, the religious variety show played a huge part in the ‘God Slot’ on Sunday evenings. The choir performed hymns with the likes of the forces sweetheart, Vera Lynn and Irish singer, Gilbert O’Sullivan.

“When we did the show with Vera Lynn, she came and sat next to me during a filming break. We were chatting and I said to her, ‘you know, my mother can’t stand you.’ She looked at me in disbelief.

“Then I finished with, ‘because my father thinks you’re wonderful.’ She cracked up laughing,” Cal says.

Today, the choir continue to perform for audiences across South Yorkshire and the farer vicinity, with around 40 members who practice Wednesdays and Sundays.

With an average age of 70-years-old, the tenors, baritones and bass are made up of both active and retired workers from a whole range of industries. Builders sing with milkmen, drivers stand by farmers, and electricians harmonise with accountants.

Although now based at Goldthorpe Church Hall, the members come from many different villages in South Yorkshire, and continue to showcase the Thurnscoe Sound across the region.

In March, the choir will be performing a very special set at Wentworth Woodhouse in the Marble Saloon.

Hoping to encourage a new wave of singers, the choir are here to prove that despite its long history, they will continue on for generations to come.

For more information about the choir and to hear their new recording, Sounds Harmonic, visit www.thurnscoe-hmvc.com