With war rife in 1914, ordinary men from across the Barnsley area responded without hesitation to their country’s urgent need for more soldiers, enlisting together as the 13th and 14th battalions of the York and Lancaster Regiment, or the Pals.

During the war, the Pals would have taken their battalion Colours overseas, marching behind them and using them for identification and as a rallying point. Following their dissolution at the end of WWI, the Colours were laid up in St Mary’s Church where they have since remained, at risk of turning to dust alongside several other British Legion Standards.

In preparation for her Somme Centenary commemoration last year, Jane visited St Mary’s to pay her respects to the men listed on the various war memorials. Here, she saw the forgotten Colours in the dusty glass fronted cupboard at the back of the church, and, encouraged by the enthusiasm of Rev. Canon Stephen Race, has since sought advice from key individuals and groups, launching a campaign to conserve the colours and keep another unique memorial to our brave soldier ancestors alive.

Some of the men left little trace behind them by way of obituaries, documents, medals or photographs, so these Colours are perhaps the closest thing the town now has to the Pals.

Thanks to a grant of £500 from the Dearne Valley Landscape Partnership, Jane invited an accredited textile conservator from the People’s History Museum in Manchester to St Mary’s last November, who assessed the condition of the Colours and options for preserving and displaying them. 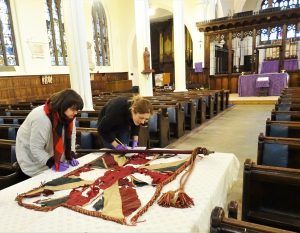 With hopes of relocating them to a more prominent position in the church’s memorial chapel, the next task is to raise the £13,000 needed to preserve the two Colours flat within special glass fronted frames, along with any other extra costs.

Combining Jane’s passions for family history and local history, her latest project is another way of honouring and remembering those who served in the First World War.

After moving back to her birthplace Barnsley in November 2012, Jane decided to write a memorial book for the Old Boys of Barnsley Holgate Grammar School who died in WWI, published as Great Sacrifice by Helion last March.

When research began, she discovered that Barnsley did not have a Roll of Honour, and so set about researching the war memorials across the district to compile an official list of Barnsley people who lost their lives serving in the forces by, with all the information she had collated donated to Barnsley Archives on Remembrance Day 2013.

Realising that the project was too large for one person to complete, she invited those with a shared interest to join her, where she founded the Barnsley War Memorials Project.

For last year’s 100th anniversary of the Battle of the Somme, Jane organised an event on July 1st at Silverwood Scout Camp in Silkstone, where the Pals trained before being deployed. She was supported by the Scout Volunteers, Horizon Community College, Silkstone Primary School and relations of some of the Holgate Old Boys, with the service in the outdoor chapel proving to be a poignant commemoration.

As with many families, Jane’s Barnsley roots are swathed in military endeavours. Two great uncles from Hoyland and Elsecar sacrificed their lives for their country in WWI, aged only 20 years old. And her father, John Charles Hardy, from Hoyland, had his university degree interrupted and his wedding to Jane’s mother Edith put on hold after being called up into the Royal Navy during WW2.

Reluctant to leave the South Yorkshire roots he loved, Jane’s father moved his family across the border to Lancashire in 1960, after getting a promotion to a new secondary school in Chorley.

Despite her father being a history teacher, Jane was uninterested in the subject for most of her younger life. However, when her father died in 2002, he left his four children a treasure trove of old photographs and memorabilia in addition to his Curriculum Vitae, which included key details from his own life with his recollections of his family.

Inspired by this, Jane started to research her family tree which developed her obsession with local, social and military history.

Since her return, Jane, who is currently writing another book, has done so many wonderful things to keep the heritage of Barnsley alive, particularly its wealth of military history.