At the bugled call of the mustachioed military maestro, Lord Kitchener, in the summer of 1914, mothers up and down the country waved goodbye to their heroic sons who gallantry left in search of peace at the birth of the Great War.

But for one lady in Barnsley, she shed a tearful farewell to all of her six sons who each enlisted in battalions across the country ready to fight for their King at the same time.

A real life band of brothers, The Valliant Sixsome from Stairfoot are the ancestors of Eric, Trevor and Maurice Lee from Barnsley. 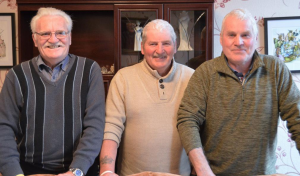 Although not uncommon for two or three brothers to serve together, it is the story of how all six boys of the nine Watson children chose to join.

From their house in Albion Road in the old Sodom area of Stairfoot, a widowed Jane Watson nee Ferdinand waited nervously for word of injury or worse as her boys spent months and years risking their lives in the thick of the trench warfare.

After her husband Thomas died of smallpox in 1894 aged 41, the family had moved to Barnsley from Clyde Road, Tottenham in search of employment and a cheaper cost of living. She also moved back up north to be closer to her family – she was born in Bradford before meeting Thomas in Darlington where he worked as a railway signalman and she at a twister worsted wool factory.

With seven children in tow, many of them found work down the mines or in the glassworks which were major industries in Barnsley.

When war broke in 1914, Jane and her three daughters were left to whittle and worry throughout the war years as off the boys marched to fight for the good of the country.

Praying for the safe return of the sons she didn’t give willingly, Jane was just one of thousands in Barnsley whose children made a sacrifice to volunteer their services in the war.

Two of Jane’s sons were already part of the regular army before the war began, both serving in the 2nd Northumberland Fusiliers – part of the second largest British infantry. With roots up in Darlington where their parents were married in 1874, it’s no surprise that William and Thomas Arthur chose a regiment up north. 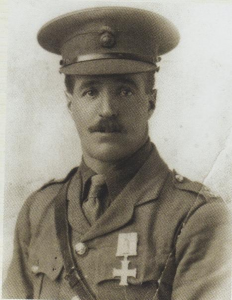 William, the fourth child, started his army career at 19 while the rest of his family lived in Barnsley. At the start of the war, he’d been in the military for 16 years, rising to Second Lieutenant. His younger brother Thomas was a Private in the same troop, having joined his brother while also working as a platelayer on the railways in Barnsley.

Before the war, the brothers served in India and South Africa for over three years, sent to France when the war broke out. In August 1914, Thomas was wounded in Lille and spent Christmas at home with his family before returning in the New Year where the troop headed to Ypres in Belgium.

It is here that William’s bravery and earnest leadership skills took hold. After their Captain was killed and the majority of the platoon wounded or killed in May 1915, Willie continued to hold down the trench in spite of heavy shellfire, earning himself the Military Cross.

William was promoted to Colour Sergeant, with Thomas Arthur becoming a Lance Corporal for the 1st Northumberland Fusiliers. William’s army career lasted 46 years, after which he acted as a Freemason before passing away at 67 in Newcastle. Thomas was wounded twice and given the victory and war medals.

With enlisting not compulsory before the Military Service Act of 1916, the British Army relied on the heavy influx of volunteer soldiers, with over one million men joining in the war’s first year. Schools and communities were swallowed up with some suffering grievous losses throughout the war.

Among the volunteers were Jane’s remaining four sons who were all keen to willingly serve, undertaking different roles.

As a coal digger, Albert’s role in the T’owd Twelfth would have been to assist another battalion with the construction of trenches. With a shovel and a pick each, the 12th were tasked with heavy manual work and engineering.

After training in Otley and Ripon, the 12th first landed in Egypt in December 1915 before being transferred to Serre in France to join the Western Front. On the first day of the Somme, the pioneers and their adjoining battalions faced overwhelming German machine gun fire, with 80 percent of soldiers wounded or killed in the battle.

It is not known if he was wounded in the attack, but Albert was discharged in August 1918 after being wounded during his time in the pioneers. After returning to Stairfoot, he worked as a general public works labourer, possibly employed by the council to help with the town’s development after the war. 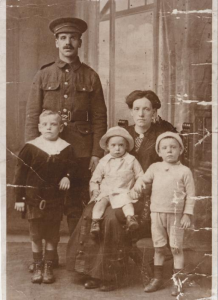 Ferdinand with his young family

The Lee brothers’ grandfather, Ferdinand Watson, or Fred as he was known, was Jane’s seventh child. When the war broke out, he was a 25-year-old miner living in Stairfoot and married with three children.

He joined the 13th Battalion of the York and Lancaster Regiment – or the First Barnsley Pals – in October 1914 and remained on British turf as part of the home fleet.

Following a three month medical respite, Fred was sent to France in early 1916 where he survived the bloody Somme, before returning home after two years. Whilst in the army’s command depot in Ripon, again on medical grounds, his fourth son died aged seven months from measles and pneumonia.

After spending over four years in the Pals battalion, Fred was discharged and released with flat feet and varicose veins, plus impaired vision. He was given a silver war badge plus the King’s certificate, British War and Victory medals and went back to work down Barnsley Main and then Grimethorpe collieries where he worked for 53 years in total.

“He was registered partially blind which may have been caused during the war. People always used to joke that he’d survived the Somme but would end up getting run over walking all the way to Lundwood Club from Cundy Cross every day because he couldn’t see,” Maurice says.

Fred and his wife Sarah Jane from Wombwell went on to have a total of ten children, with the Lee brothers’ mother Ethel their only daughter. She’s 95 this year and is joined by her two remaining siblings, Kenneth, 92, and Gordon, 87.

The eighth child, George Henry, joined the 2/5th Reserve Territorial, York and Lancaster Regiment, but no records have been found of him by the Lee brothers. As a reservist, he may have never fought overseas, waiting at home to be called up. What is known from pre-war census is that George worked as a bottle packer at the glassworks, possibly Rylands’ Hope Glass Works which was in Stairfoot. After the war, he moved to Darton where he lived on Woolley Colliery Road.

The youngest child, Ernest, still lived at home with mum Jane before the war where he worked as a colliery labourer above ground. Unlike his brothers, Ernest joined the Royal Navy in the Collingwood volunteer battalion and was just 20 when he left for war. 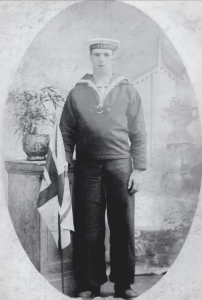 Ernest, killed in action in Gallipoli

With a surplus of 30,000 naval volunteer reserves who didn’t find jobs on the ships, Churchill formed land brigades named after commanders, using the manpower to secure and defend the British ports.

Unlike the marine brigade, the volunteers were a lightly equipped infantry without medical, artillery or engineer units. After being sent to Gallipoli in Turkey, Ernest was killed in action on 4th June 1915 aged 21. He was one of 250,000 casualties at the failed Dardanelles invasion campaign and his name is listed on the Helles Memorial.

Just a short time before on 23rd April, Jane had received a letter from the King’s Privy Purse keeper, FM Ponsoby to express the His Majesty’s appreciation of the patriotic spirit which prompted all six sons to give their service. He’d been gratified to hear how they’d all readily responded to the call of sovereign and country and congratulated her on contributing in such a brave measure.

After Ernest’s untimely death, Jane was evicted from her house in Sodom as she had heavily relied on his mining income of 20 shillings a week and so couldn’t afford the rent; the pension she received for him at five shillings was merely inadequate.

News of Jane’s story soon got round and a letter from a Barnsley MP was sent to Parliament insisting they change clause 21 of the pension scheme.

With her other five sons all married, their high wages were also used to support their widowed mother; yet their separation allowances from the army went to their wives and families. The MP argued that if Ernest hadn’t gone to war, Jane and her son would have still been living in their home.

After such patriotism from the family, he was ashamed of his country if this wasn’t the last story of its kind and asked the pensions minister to make special grants in future cases of this nature.

Taking into account Ernest’s potential assistance value once his wage would have ultimately increased, he also made claim that Jane’s pension should be fixed with special consideration in the hope that such a case and generous amount would encourage other women to not fear sending their sons to war.

The family never knew the outcome of the MP’s letter.

In a sorrowful turn of events, Jane herself died in June 1917 age 64, over a year before the war had ended; she never got to see all of her five remaining sons return home to Barnsley.

Some in Barnsley lost their only sons, others lost as many as three during the Great War. So it is remarkable that Jane therefore only suffered the one devastating loss to her own family.

Under the billowing cloud of the Blitz in WWII, the previous war records had been totally destroyed and so the Lee brothers have somewhat struggled to piece together the Watson story through memories of relatives and any remaining records.

All six of the brothers are named on the Roll of Honour at Stairfoot’s Wesleyan Chapel on Huningley Lane along with other men from Stairfoot who went to war.

Childhood memories are filled with war stories passed down through their mother from her father Fred, Ernest’s memorial plaque and war medals hanging on their living room wall.

Sharing memories and memorabilia, Eric, Trevor and Maurice have researched their roots together and found a shared interest in the lives that were. Eric is taking a trip to France this summer to take in the sights of where the overwhelming devastation was caused.

With the six Watson brothers plus their three sisters, the Lee brothers are calling for distant relatives to also get in touch as they’d wish to locate many of the war medals which have been lost over time.