You and Your Health: Healing Herbs

Herbs and plants have been used for healing and medical treatment throughout human history.

In times of illness, ancient cultures relied on knowledge passed down through generations for thousands of years, with many documenting their use.

The oldest surviving example is the Ebers Papyrus, a 1550BC Egyptian herbal textbook that features 700 concoctions to treat a range of ailments from dementia to toenail pain and even birth control. In India in around 700BC, a list of 300 medicinal plants was compiled for the Chakara Samhita.

Popularity of herbal remedies has varied throughout the centuries but today many of these plants are still used as the source of our modern pharmaceutical medicines.

The popular painkiller aspirin, also used to prevent blood clots, is derived from the willow tree. Hippocrates in around 400BC administered willow leaf tea to women to ease the pain of childbirth. Centuries later in 1763, willow bark successfully treated patients with fevers. After many years and experiments, salicylic acid was found to be the active ingredient and this was synthesised to produce the aspirin we are familiar with today.

A common plant, the foxglove – or digitalis – was found to have an effect on heart muscle. While examining a patient in Staffordshire, a Scottish doctor found their heart condition to be incurable; instead, the patient turned to a gypsy and received remarkable curative treatment.

The doctor sought the gypsy and identified foxglove leaves to be responsible. He ground the leaves up and used them successfully on his patients. Eventually, digoxin was synthesised and is used to control heart rate and lower blood pressure.

Quinine for Fever and Malaria

Legend has it that Spanish noblewoman, the Countess of Chinchon, developed a fever whilst in Peru in the 1600s. She was given a ground up powder made from the bark of a tree known as the fever tree and was miraculously cured. This tree was then known as the Cinchona tree and the bark was taken to Spain in around 1640.

About 60 years later, French scientists discovered that the medicinal ingredient was quinine and found a way to extract it from the bark. The British army officers in India made the daily dose of quinine, used to prevent malaria, more palatable by mixing it with lime, sugar, water and gin – thus inventing a recipe for Gin and Tonic. Quinine was used to prevent malaria for many years, but modern medicines are now available; although it is still used occasionally for malaria and leg cramps at night.

Narcotics and clinical pain relief such as morphine and codeine are derived from the Opium poppy, being extracted from the sap of the unripe seed head. Due to its euphoric potency, opium has been smoked recreationally for centuries in dens.

In Victorian times, Laudanum (containing one percent morphine) was promoted as a painkiller for all sorts of ailments including teething babies and was sold widely in markets and chemists’ shops.

Heroin is made illegally from morphine, while its medicinal form, called diamorphine, is a very strong painkiller and is made under strictly controlled conditions.

Excessive morphine use can lead to patients becoming dependent or tolerant and so is primarily prescribed for severe pain. A more widely known painkiller and cough suppressant made from opium is codeine. This can also be addictive but is often added to proprietary medicines and supplied on prescription. 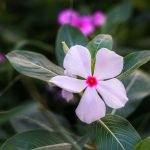 One of the great recent discoveries was the Madagascar periwinkle; this plant is very similar to our lesser periwinkle but has pink flowers not blue. It is very poisonous but luckily is native to rainforests where the Africans brewed it to treat diabetes.

It was brought to France in 1785 and used for treating diabetes, sore throats, pleurisy and dysentery. In 1950 scientists experimented on it hoping to find a cure for diabetes, but surprisingly isolated two chemicals used in cancer medicines. These are vinblastine used very successfully in childhood leukaemia and vincristine used for Hodgkin’s disease.

In the 1960s, the Americans started research to find cancer treatments from plant and animal sources and tested 30,000 samples in this project. Bark from the Pacific yew tree in Washington State was studied and from this the compound paclitaxel was discovered which was found to have antitumor activity.

This was an important breakthrough; however a great deal of bark was required to obtain a small amount of paclitaxel and stripping the bark kills the tree. The cost of obtaining paclitaxel was exorbitant. Eventually, after much research and trials, Taxol was synthesised in the laboratory and became an extremely important medicine for treating breast, ovarian cancer and several other cancers.

It is obvious that many more discoveries could be made and protection of our plants especially in the rainforests is essential.

You and Your Health: Alcohol