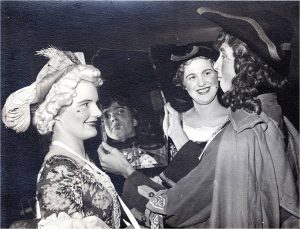 For over 60 years, Roger has dedicated his life to amateur and professional theatre in his hometown, playing every role in his enduring monologue from actor to set builder, producer to publicity manager.

A chorus of stage performances, inspiring young people into theatre, fundraising to open new theatrical venues, and even rubbing shoulders with Hollywood stars; Roger has seen it all.

Like most children, Roger had his first taste of theatre at a family pantomime, going to the Theatre Royal on Wellington Street with his mother in 1949, later, visiting theatres in Bradford, Sheffield, Leeds and Blackpool.

Around the same time, Roger made his first appearance on stage in a Gang Show at St Paul’s Church, Old Town. While a schoolboy at Wilthorpe School, Roger attended the cubs with many of his friends. Based on Ralph Reader’s original idea, they would put on annual variety shows, with Roger performing with 60 other scouts and cubs.

Yet it wasn’t until he reached Holgate Grammar School that Roger became fully interested in the magic of theatre, encourage by his English teacher.

“My English Literature teacher was the late Peter Dews who went onto become an internationally acclaimed director. Instead of us reading out Shakespeare’s plays, he had us act them out in class which was far more interesting.

“Mr Dews left Holgate to join the BBC where he created An Age of Kings, the first televised production of Shakespeare’s history plays for which we won a BAFTA and later a Tony Award on Broadway.” 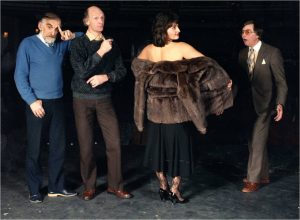 Roger would go on to appear at St Paul’s Church again many times over the years, performing in variety shows and pantomimes, setting the stage for continuous involvement in Barnsley’s entertainment scene up until this day.

In 1960, Roger played one of Cinderella’s Ugly Sisters, Ermyntrude, alongside his own sisters Susan and Deidre plus two Barnsley girls who went onto the bright lights of stardom. His cousin, Josephine Jackson, would one day become a Tiller Girl dancer, while Victoria Nixon became an international supermodel. Victoria’s brother, Nicholas, designed and painted the sets with Roger.

Roger also appeared with Barnsley Junior Operatic Society in many Gilbert and Sullivan operas at the old Boys Club on Westgate, before reaching the ripe old age of 21 when he was deemed no longer a junior.

A career off the stage 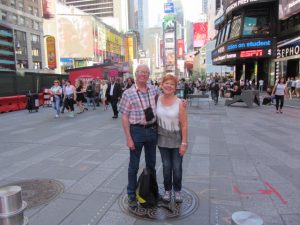 Like most people in amateur dramatics, Roger balanced his hobby with a responsible career. While at school, he had three jobs: delivering papers in a morning, meat two days a week and selling programmes at Oakwell. After leaving school, Roger joined the General Post Office and went on to become a staff manager at the Regent Street head post office.

Here he met his wife Alice who was working at her grandfather’s chemist shop round the corner from the post office; she later went on to obtain her state registered nursing qualification before becoming Sister Walton at Mount Vernon Hospital.

The couple have just celebrated their 50th wedding anniversary last summer in the bright lights of Broadway, New York – where else?

Playing the sportsman and soldier

While with the GPO, Roger was also Captain-come-Secretary of the civil service football team, playing alongside other theatre folk such as Barnsley Civic’s manager, John Simmons and Geoff Whitfield who now owns Birdwell’s Take 2 Theatre.

“As secretary, I would be the one called into any disciplinary meetings which happened often. Our goalkeeper had a penchant for keeping his cigarettes in his flat cap and sparking up mid-match before going in for a save with it hung out of his mouth. He left one stuck on an opposing player’s forehead.

“One time, two of our players ended up disagreeing and fighting before the match. The panel said it was the first time they’d ever heard of fighting on the same team – but I explained the two involved were a Glaswegian and a Londoner and so it was never going to be a match made in heaven. The club was fined £2 and the two players docked 10 shillings.”

Roger was also a part-time soldier in the Territorial Army as part of 271 Field Regiment Artillery and later the Hallamshire Battalion.

“I had the intention of only ever staying for two years but I was actually there for almost ten from 1958 to 1967, the latter five years of which I was a signals instructor in Sheffield.”

After 12 years with the GPO, Roger moved into sales and recruitment where he stayed for 30 years before launching his own sales and marketing company, Spotlite Marketing. 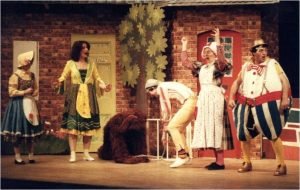 During the 70s, his time on stage called for him to exit stage left and take his spot behind the scenes instead.

As a founding member of Barnsley Children’s Theatre, a group of adult actors who performed for children in schools and theatres, Roger’s time was spent trying to strike a chord with the younger generation in the hope of sparking an interest in theatre.

Roger was also on the committee at the Junior Operatic Society and organised dinner dances for the members at the Queen’s Hotel, Regent Street.

In the 80s, Roger’s plight to help retain the heart of theatres in Barnsley went up a gear at the formation of the Barnsley Theatre Trust charity. The driving force behind the trust, Roger and a team of volunteers and local theatre goers raised £25,000 along with a further £15,000 in labour and materials donations and £25,000 bank loan to acquire the old Globe Cinema from South Yorkshire County Council.

After extensive renovations, the team converted Barnsley’s first cinema into the 400-seater Globe Theatre to be used by both amateur and professional performers. The theatre went onto become locally and nationally acclaimed, with many of the performances directed or produced by Roger starting the careers of local actors such as Paul Hudson, Jeremy Peaker, Phil Shepherd and Peter Foster to name a few.

“We were doing Cabaret one time and I knew Liza Minnelli was in London staying at The Savoy. I phoned and asked to be put through to her, telling them I was from The Globe Theatre – they presumed I meant Shakespeare’s theatre not Barnsley’s.

“When Miss Minnelli answered I told her of our show and she wished all the performers well for our opening night.” 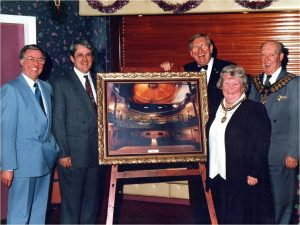 When Warner Brothers came to Barnsley to film Bert Rigby You’re a Fool, a lot of the production was shot on the Globe stage and the Theatre Royal, with Roger enlisted to help recruit extras from the town while providing hospitality for the show’s stars, Robert Lindsey and Robbie Coltrane.

After ten years, the theatre was demolished to make way for the relief road; yet Roger’s efforts didn’t stop there. After the success of the Globe, it was evident there was a need for a theatrical venue in Barnsley town centre so amateur and professional groups could continue to perform in a proper theatre.

Following the closure of the Globe, together with John Kelly and the late Ian Sutcliffe, Roger launched the Theatre Royal appeal to try and buy the former theatre which had been turned into a nightclub. However, this venture wasn’t to be. But as they say in show business, the show must go on and so they used the funds they had raised to purchase the old boys club on Westgate instead.

Thanks to a gracious donation from John Kelly who remortgaged his home to buy the dilapidated building and so The Lamproom was born in the late 90s.

Thanks to Roger and various other theatre folk, children like John’s daughter Katherine and her sister Gracie had had an outlet in the town with the Lamproom, somewhere to let their talents flourish and hopefully forge careers in the industry, which both went onto achieve.

Keeping this dream alive for other children and young people was worth the endless hours spent turfing out the rats from their forgotten home and instead creating a theatre the people of Barnsley could be proud of. 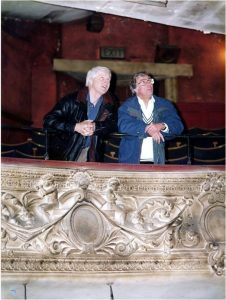 Still a trust director today, Roger’s involvement and dedication to the Lamproom has meant it will continue to be a beacon of hope and entertainment for the town.

In 1992 and 1995, Roger produced the nationally acclaimed Worsbrough Mystery Plays with their casts of over 100 local actors.

Not just about theatres in Barnsley, Roger’s 60 years have also amassed productions in other towns, especially a version of Randle’s Scandals which toured 11 major northern theatres in 1997. Starring Keith Clifford from the Last of the Summer Wine and Roger’s old friend John Kelly, the production also launched the professional career of Katherine Kelly who went on to play Becky in Coronation Street.

As the millennium arrived, Roger hung up his working hat, actor’s costume and folded up his director’s chair as he officially retired to spend more time with his wife and family. The couple have one son Nicholas, an independent financial adviser, daughter-in-law Joanne and three granddaughters.

However, Roger is still very much playing a part in Barnsley’s theatre scene, giving talks about its history as well as remaining heavily involved with the Lamproom.

Life is not a dress rehearsal and sometimes you might have to ad-lib, but there’s one thing for sure; Roger’s life mixed with theatre and reality has been a show stopping story.