With twinkly blue eyes, rosy, dimpled cheeks, and a beard on his chin as white as the snow, there is no mistaking our current interviewee as he strides merrily through the door.

He might have left his famous red suit at ho-ho-home, but his joyous spirit and generous demeanour personify the true meaning of Christmas in every way. 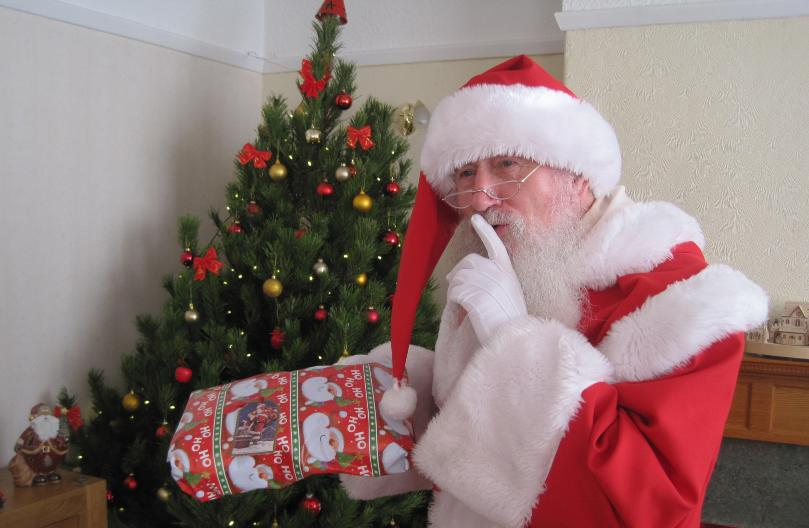 Whether you know him as Santa Claus, St Nicholas or even Kris Kringle, there can only be one person we’re talking about – the legend that is Father Christmas.

Now, you may be wondering how we came about meeting this VIPapa here in little old South Yorkshire, but we have it on good authority that when they say Santa Claus is coming to town, they really do, in fact, mean Rotherham.

The start of his days in Rotherham

Having travelled the earth for centuries gone by, despite the warmer climates and exotic cities elsewhere, Father Christmas has struck up an endearing connection with the people of Rotherham since he first experienced it outside of his regular Christmas Eve dash over 40 years ago.

Back in 1976, the teachers at a Rotherham primary school sent an SOS to the North Pole to see if Father Christmas could spare an hour in his busy pre-Christmas schedule to come and say hello to all the boys and girls who had been especially well behaved at school that year.

“People often assume that I live at the North Pole but there is actually nothing there other than ice and snow so it would be impossible to survive. Luckily, Frosty redirects all the many letters that find their way there to my real address at Lapland,” Father Christmas says.

Since that very first visit, he loved Rotherham so much that he decided to make an annual visit to catch up with the teachers and find out if the pupils had kept up their good work each year so as to stay on the Nice List.

Wanting to see as many happy faces as possible, he visits over 30 schools in the area as well as Christmas fairs and church services.

“It’s brilliant as I get to meet lots of people who would usually be asleep when I visit on Christmas Eve. I love to listen to every child’s story and hear what they’ve been up to all year.

“However, my wife does suffer slightly as I don’t see her properly from November onwards. This year, the schools don’t finish until the 22nd so I won’t have my usual three to four days to rest before flying out on Christmas Eve.”

Rows of inquisitive children gaze adoringly up from their desks as the illusion of the festive fable comes to life in their classrooms. The fleeting silence is broken by curious probing, with questions fired at Santa about all matter of logistical issues surrounding Christmas Eve.

How do you get around everyone in one night? Where do you keep the reindeer? How does Rudolph’s nose glow red?  We haven’t got a chimney, so how can you get into our house?

The season of goodwill

While visiting Rotherham for many weeks at a time, Mrs Claus often comes along for the sleigh ride. But while the big man is out greeting children, she is looking for ways to donate her spare time and so volunteers at Rotherham Hospice.

One evening over a mug of hot toddy, the conversation turned to Mrs Claus’s work that day at the hospice. The Claus household was euphoric with glad tidings and joy yet also tinged with the ash of sadness at the brilliant work the staff and volunteers at Rotherham Hospice do to help people during life limiting illness.

His schedule might be bursting more than his sack of presents, but Father Christmas decided he too should give a small ounce of his time to giving even more than he already does by doing meet and greets at the hospice festive fairs. This year, the fair is at Carlton Park Hotel on Saturday 18th November.

He also visits the Sunbeam bereavement group two evenings during December to visit children who have lost parents or grandparents as well as making surprise visits to the hospice to bring gifts to families who may be spending their last Christmas together. 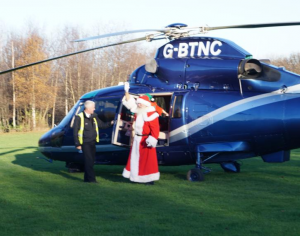 Two years ago, Santa heard on the Elf-line that there was this so-called Santa Dash happening in Clifton Park, hosted by Rotherham Hospice.

“They asked me if I’d mind kicking things off. Over 300 of my lookalikes were planning on taking part in a mile long fun run through the glorious park. I’m okay with sharing the stage for one day, as long as they raise the money for the hospice. But obviously there could only be one real me – I don’t wear trainers.”

The event was a success, and last year, the participants managed to raise £8,000 for the hospice through entry donations and sponsorship. This year, they are hoping to double that amount as the Santa Dash returns on Sunday 3rd December.

With his reindeers resting for the month before Christmas Eve, Father Christmas needed to find alternative transport to get him to the event and so last year, aviation company Multiflight flew him in by helicopter from Leeds Bradford Airport.

“They’re getting on a bit now, my reindeer; Dasher is more like Dragger and Vixen more Veteran. Plus, I’ve got good connections with the airport. They keep me updated as to what could be blocking my route in the sky on Christmas Eve.”

This year, one lucky family could win the chance to fly with Santa in his helicopter as he arrives into Clifton Park. 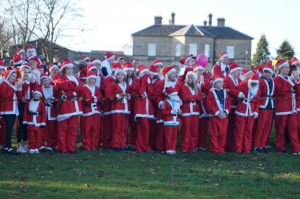 Raffle tickets are just £1, with four other prizes up for grabs including a family Christmas dinner for four people from Wrays Butchers and KD Davis Greengrocers, a real tree, Christmas hamper, plus entry to the Christmas Adventure at Stockheld Park.

At the Dash, there will also be a Christmas market where Santa will be in his grotto surrounded by a real fireplace donated by Rotherham Fireplace Centre.

“Back in the day, I could always stock up on coal when I came to Rotherham as they had it in abundance in the many pits. But there were never that many children on the naughty list so at least it came in handy for my grotto fireplaces.”

The night before the Dash, Father Christmas will be stopping off at Whiston village for their annual Christmas lights switch-on where he’ll be dashing through the streets on his sleigh.

With so many children to visit throughout his time in Rotherham, the elves are busy all year round stocking up on presents for him to bring.

“At home in Lapland, our loft is like a grotto. Mrs Claus wraps and organises all the presents and makes sure my suit is freshly laundered and hung up ready for me to wear.

“We also have a special Christmas cupboard full of mini-me figurines to decorate our home with. But Mrs Claus won’t let me put all of them out as she says it looks more ‘grotty’ than grotto.”

Not just about the children, Father Christmas makes use of his little spare time in Rotherham by visiting the elderly in retirement homes, too.

“The magic of Christmas is for all ages and I often see their eyes gleaming with joyous memories of old.” 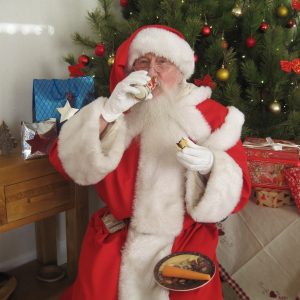 utside of his visits, there is no going under the radar in Rotherham. He stops traffic when travelling in his pony and trap. People question why he doesn’t always wear his robes – surely Santa deserves a day off too. And children are always quick to spot him in the supermarkets pushing his trolley.

“They’re always surprised that I don’t just buy carrots and milk. I tell them I am always watching and keeping an eye on their behaviour.”

If he gets chance, he loves to watch the Millers play on a Saturday; fascinated with the so-called second New York to the one which kicked off his career.

And he also visits further distant places, from Doncaster and Lincoln to France and Fuerteventura where they all know him as Papa or Pere Noel.

After a long delivery day, Christmas back in Lapland is a quiet affair, with Mrs Claus rustling up a feast for all the elves to thank them for their hard work. With a brandy in hand – but no mince pies, he’s had enough – those big black boots are off and a snooze is underway as he prepares to start it all again the next day.

So, this festive season, if you’re out and about in Rotherham, keep your eyes peeled for the real Father Christmas just might be amongst us.