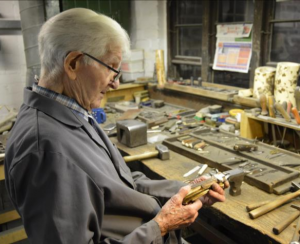 Shaping, filing and polishing away, there sits a kind-faced old man in his grey cotton overcoat, his hands bearing the brunt of 76 years spent as a master craftsman cutler.

Peering through the old window of his Little Mester Street workshop at Kelham Island Museum, it is clear we’re about to stumble upon one of South Yorkshire’s finest unsung heroes.

Still hard at work at 91-years-old, Stan Shaw is a rare phenomenon for his age. But what makes his story even more special is the unbelievable products he crafts by hand.

One of the few remaining Little Mesters who brought Sheffield its legendary cutlery reputation, Stan has been making exquisite penknives for almost the entirety of his life.

Stamped with his name, his penknives have travelled around the world, gaining critical acclaim from royalty and celebrity alike. But what really glitters is the story of how it all began.

One of eight children, Stan was born in Worrall near Wadsley in Sheffield, before the family moved to Oughtibridge. The family saw times of hardship from Stan’s early days; his miner father died from TB age 45.

To add insult to injury, so to speak, Stan slid off the coal house roof when he was four, landing on his hip and ending up in hospital for ten long years after contracting the same disease which stole his father.

In a time before the NHS and antibiotics, all of Stan’s childhood was spent in King Edward’s orthopedic hospital in Rivelin Valley and his teenage years in Dame Agnes Hunt orthopedic hospital near Oswestry where he had a bone graft on his right hip..

“I was the best off out of all of us, at least I got three meals a day. My mother had a hard life but I never knew it with being in hospital,” he says.

After finally being discharged at 14, Stan left the hospital with little education having been taught the bare necessities bedside. Unlike his peers, he also hadn’t learned a trade at school to enter straight into employment.

“I needed to look for a job. I was on crutches but I was lucky to be alive. I went to Sheffield on the bus for a penny and sat there thinking ‘what am I going to do now?’”

After steadily walking the streets and looking around all the businesses, Stan came across George Ibberson & Co on Rockingham Street.

“I knocked on the door and told them I was after a job. They said to me ‘what’s tha want to do, lad?’ I looked around and pointed to the penknives. ‘I want to make them,’ I said.

“They took me on as an apprentice and I started on five shillings a week.”

Back then, Sheffield was paved in steel and cutlers bore the coat of arms, and wealth, of its magnificent trade. But the industry started to decline and businesses closed.

Ibbersons was bought out in the 1980s and after working for several other firms who also closed, Stan decided to go it alone as a Little Mester; a lone wolf craftsman who would make individual items from start to finish.

When others would have been looking to retire, Stan was starting out in business at 56-years-old. But with the chance to finally make what he wanted to and not what he’d been taught in the factory, Stan has since enjoyed 33 years of working for himself.

“I was scared stiff that I’d never get work and I wasn’t particularly young. But I took a dozen penknives to Sheffield Scene on Surrey Street and came out with a thousand pound order – I’ve never looked back.”

With business taking flight, people were enamoured with the beauty of Stan’s work. Starting out in an upstairs workshop on Garden Street, Stan moved to Kelham Island nine years ago when the stairs became a struggle for his bad hip.

Like the Rolls Royce of penknives, all his products are made from his own patterns and designs. The only machine in his workshop is a grinder – every component is cut, shaped and buffed by hand from flat steel he buys from Greensmiths on Spital Hill.

A one-man-band, Stan still uses the original Ibberson forge-made hammers he started off with all those years ago. Hundreds of files, screw drivers and drill bits line his desk in precise soldier-like order waiting to be used.

Getting up before 6am, Stan drives from his home at Deepcar to Kelham Island two days a week to make his way through his four-year waiting list of orders.

“Its physical work so I need to get something done. I keep saying I can’t go just yet as I need to wait till I’ve finished all my orders.

“I start early at 7am and have a full day at it. People walk by but I’m always too busy to talk. I can hear them talking and questioning where I buy all my parts – they don’t realise I make everything.”

Like a mini assembly line, Stan creates the same components for many different knives at the same time for efficiency, even down to twisting the corkscrews.

Most will have never seen knives like them before, the elaborate workings of a true master of this art. Ranging from two to ten blades, the handles are crafted from everything from stag horns and aged ivory, to abalone pearl from the Pacific Ocean.

Stan shows us the Hallamshire, the 15 different components thrusting out and gleaming like the iridescence of a majestic peacock. With so much attention to detail, Stan has only ever been commissioned to make 25 of these knives in his time, each one hallmarked with its issue number.

Once upon a time, everyone on the street or at work would have owned a pocketknife. Yet today, they’re bought to keep, becoming heirlooms and collectables due to their rising expense.

“Some will never imagine what one of my knives can cost, but people don’t mind paying. Some say it’s like having a pension or a classic car.”

During his time, Stan has rubbed shoulder with both monarchy and rock and roll royalty.

When they Queen visited Sheffield in the 80s, Stan was commissioned to make a platinum knife for Her Majesty, stamped with the initials ER and a rose emblem.

When her son, Prince Andrew visited for the HMS Sheffield Memorial a few years ago, he was desperate to be gifted with one too after studying his mother’s knife for many years. Customary to give a coin when presented with a knife, the Duke of York personally swapped gifts with Stan at Sheffield Cathedral.

Moving onto musical royalty, Stan’s knives have become popular within the Rockstar scene thanks to a lad from Stocksbridge called Rex.

After moving to Bristol to buy a hotel, Rex, an old school friend of Stan’s wife Rosemary, would often have major music stars stay with him during their UK tours. With his own collection of Stan’s knives, they would make an appearance and catch the eye of many famed singers.

“Buddy Holly and the Crickets – they all wanted one. Sonny Curtis, his lead guitarist invited Rosemary and me to visit him at his home in Nashville when we visited the USA.


“All the members of Elvis Presley’s T.C.B. band have bought knives. When they were in concert in Sheffield, me, Rosemary, my daughter and granddaughter were invited to have dinner with them and the Sweet Inspirations before the concert. Glen Hardin, his pianist, still phones me every birthday.”

Regardless of where his customers are based, every knife must be collected from him personally in Sheffield.

“They start here and they finish here. If people don’t come, they won’t get them.”

With such a heavy demand for his knives, Stan’s wife Rosemary is the backbone to his success, still taking control of his books and orders at 86.

Having worked in the offices at Samuel Fox’s Steelworks in Stocksbridge, Rosemary learned on a computer and so is kept busy while Stan is in the workshop.

“She’s clever and sorts me out. It keeps her active and we’ve got a great partnership, even after 63 years of marriage. I keep saying to her ‘don’t you go before me.’ I wouldn’t know what to do without her.”

With three children plus four grandchildren, Stan brings his craft home with knives for family birthdays, christening and celebrations. He’s even made 18th birthday gifts for his grandchildren who are nowhere near coming of age.

“I want them to have them now, not when I’m gone. I might never see the youngest get to 18. My two lads aren’t that good with their hands so I can’t see them taking it over, but they’re very academic. The opposite of me as I can’t add up.”

With a remarkable outlook on life, Stan continues to take each day one step at a time. In the New Year’s Honours list, he was awarded the British Empire Medal (BEM) for services to industry – no surprise after his seven decades of working life.

“People always say to me, ‘what you working for?’ I tell you, if I was younger I could make a fortune. But it’s not about the money, I can’t take it with me.

“I just love what I do. It gives me a reason to get up in the morning. I’m not a miserable person and I don’t worry about tomorrow. But I just hope my passion and love shows in my work.”