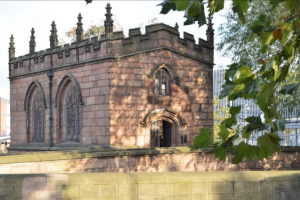 A rarity amongst ecclesiastical architecture, Rotherham’s Chapel on the Bridge has stood proudly amidst the town’s heritage for over 500 years.

Despite being just one of three surviving structures of its type in the UK, the quaint waterside chapel has become somewhat shrouded in mystery over the latter decades; with residents passing the building every day and still not knowing what lies within its thick, stone walls.

Centuries ago, the country was awash with bridge chantries, places of spiritual solace for weary travellers that coupled up with a practical solution to strengthening the structures of main town bridges.

In Rotherham, the Chapel on the Bridge dates back to 1483, at a time when the Archbishop of York, Thomas Rotherham, was pinnacle to the sacred development of his hometown.

After being inspired by his very first teacher of grammar, Thomas Rotherham opened the College of Jesus in 1482 on the site of his birthplace, now College Street.

Built in red brick, the huge College spanned a vast area of the town centre, including Effingham, Frederick and Howard Street.

A year later, and following the will of the Grammar School headmaster John Boyking in which he left 3/4d to the fabric of a Chapel, it is thought that Thomas Rotherham donated most of the funds needed to create the chapel.

As Rotherham’s greatest benefactor, his involvement, although not proven, has never been questioned.

Standing proudly in the middle of the medieval, four-arched Rotherham Bridge, the former main road into town, travellers would pass along into the chapel and pray for safety on their onwards journey or give thanks for a safe return.

Guided through the darkness by the Greaves of Our Lady’s Light, lit every night, the upkeep of the chapel was originally funded purely by donations from passers-by.

Two years after opening, a new window was added in memory of Arnold Reresby Esq. of Thrybergh, having left 6/8d in his will for the glassing of a window.

In 1490, Thomas Webster left 20 shillings towards the repair of the bridge, then called Rotherbryg.

Even before the Dissolution of Colleges and Chantries in 1547, when both the chapel and College of Jesus were made redundant, there is evidence of the Feoffees involvement with the chapel.

Responsible for the public affairs of the town, the Feoffees were also deemed accountable for streets and bridges, which in turn encompassed the chapel.

However, after it was closed for worship, the Feoffees town council took over the building, converting it into an almshouse around 1569.

Now a secular functioning building, an upper floor was added, with the medieval windows converted into small cottage windows. As well as subsidising the poor, the Feoffees also funded any repair work to the bridge chantry.

But after over 100 years of funding the building, the Feoffees contested their responsibility, with the barely habitable building being greatly repaired by the county in 1681.

When the Royalists army brought 8,000 men to the parliamentary Rotherham for surrender during the 1643 Civil War, a force of local gentry backed by 30 Grammar School boys who defended the bridge.

After the river was widened and the bridge was extended by John Platt in the late 1760s, the Feoffees requested Mr Platt’s help to turn the almshouse into the town jail.

Work finished in 1779 at a cost of £36, with the underground crypt used as the holding cells, and the former almshouse accommodation used as living quarters for the deputy constable.

The bridge became known as Jail Bridge, and visitors today can still enter the crypt to see the tight conditions.

Descend the original stone steps where prisoners would begin their fate, see the almighty cell door with its many bolts and locks, and read graffiti etched into the thick walls, the small windows letting in nominal light.

Stories have been whispered through families of passing over the bridge and hearing the inmates calling out through the bars for tobacco. Of vans laden with prisoners arriving from Wakefield, the soon-to-be inmates attempting to escape.

Constables with tall hats and blue and red uniforms; thieves publicly flogged and thrashed; women vilified by their husbands, assigned to the cucking stool and ducked into the river for just 1/6d.

One gruesome story starts with two slightly merry men from Don Pottery, who, after a night drinking in Sheffield in 1823, returned home through Attercliffe.

After passing Broughton Lane, which now passes between Sheffield Arena and Centretainement, they stumbled across the hanging remains of mail thief Spence Broughton, the gibbet or gallows having been there for 36 years to deter other criminals.

The potters stole two bones, and made their way back to Rotherham. After meandering over Jail Bridge, the constable arrested them for being drunk and disorderly, with a night in the cells the tonic to sober up.

After returning to work, the men calcified the bones and incorporated it into their clay, creating the Broughton Jug.

When the new court house was built in 1826, the prisoners were moved to the new site. But there is evidence of the chapel still being used as a jail until the 1850s, with a Mr Harold Barker telling of his great-grandfather who was imprisoned for seven days for poaching rabbits near Warren Vale. 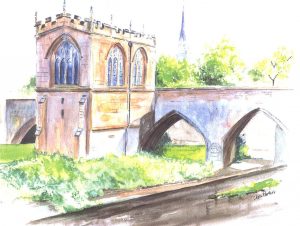 After the jail ceased, the building became a dwelling, occupied by Elizabeth Handly, widow of the former Police Inspector of the Bridge, James.

A tobacconist by trade, 1 On the Bridge ‘The Old Gaol’ as it became known, remained as a newsagents and tobacconists for many years, before the most well-known residents, the Smithemans, took over in the late 1880s.

Abithar Smitheman was succeeded by his son Henry, a self-taught artist who was a founding member of Rotherham Society of Artists.

In a quote taken from the Harmsworth Magazine in 1899, a Rotherham man once quipped: ‘My hometown is the only place where it is possible to go to church and buy tobacco.’

At the turn of the 20th Century, Rotherham residents amalgamated their beliefs that the building should be deferred back to its original usage and former glory.

Proposed by Mr J Crowther Cox in 1901, a petition by 1,000 locals was put forward to the Feoffees, with a committee set up to look at the projected costs of such a task.

The petition called for the look of the building to be unveiled, with the gothic windows put back and the interior changed from dwelling to ecclesiastical once again.

This was deferred by the Feoffees, with just urgent repairs permitted.

But in 1913, having been the mayor of Rotherham numerous times, Sir Charles Stoddart approached the Feoffees, eager to restore the chapel himself in his lifetime.

Buying the business from the tobacconists, he closed the shop and begun to turn it back into a place of worship.

Sadly, he passed away a few months later before the work was completed.

With the first World War in the midst, development plans were put on hold. But having left £500 in his will to complete the restoration, the Feoffees agreed to grant Stoddart’s wishes, and handed the rights of the building over to the Ecclesiastical Commissioners in December 1916.

Almost 100 years has passed since then, with the building still used today for Holy Communion.

After the Declaration was signed, restoration could begin, with JE Knight drawing up plans in 1919 and work undertaken in 1924.

Mirrored on the interior of All Saint’s Church, the chapel of ease cost £2,000 to renovate, with the building gutted of its former stories that hallowed around the halls.

Stone was brought in from Matlock to match the original Rotherham Stone. The bridge it sits on was restored once again in the late 20s to cope with modern traffic, renamed Chantry Bridge.

Fifty years after its re-consecration, the building underwent more renovations.

Some may remember visits inside to see the charming little chapel or the shiver-inducing crypt. Some may never have set foot through the door. 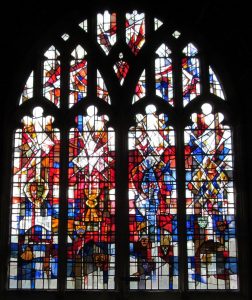 A stained glass window was added in 1975 depicting the 500 year history of the chapel and bridge. The first christening was held in 1979 and the building was licensed for weddings in 1997.

Friends of Chapel on the Bridge, which formed in 2014 on the advice of Canon David Bliss at Rotherham Minster, aim to share the history with visitors, make the building more accessible to the wider public, and fundraise to preserve the building.

Bringing together their love of Rotherham Heritage, the members continue to open the chapel on the third Saturday of the month for visitors.

After gaining a lot of interest over the past two years, member Margaret Jackson has put together a detailed book on the history of the Chapel and its intertwining relationship with other aspects of local history on behalf of the group to raise funds for the chapel restoration.

Available to buy from Hambys Antiques, Rotherham Visitor Centre, and Clifton Park Museum, the book, at £9.99, looks into further interesting detail surrounding the site, with mention to many facts and figures along the way.

The weird and wonderful happenings at Cawthorne Victoria Jubilee Museum