1st September 2020
Out and About
Read more

A haunting remembrance of the depths of poverty and pain that engulfed Victorian Britain, the irking image of the workhouse is one filled with apprehension and unease.

Although eye-opening to the despair and desolation that many often fell into, the eeriness surrounding such a topic was one which wasn’t the easiest to swallow. 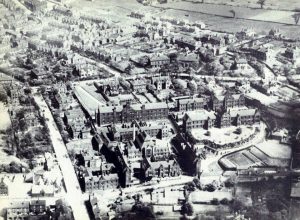 With history, we often feel a sense of heady, unrealistic euphoria surrounding the life that was, the people that were.

Yet, such stark contrast evolves with the dark and squalid visions of establishments such as the workhouse that were all too real once upon a time.

Born from the need to relieve the taxpayers from funding the poor, the workhouse was formed for only the desperate, a last ditch attempt at life left in the merciless hands of others.

Since the early days of mass population culling by the Black Death, the labour shortage caused by the plague called for the original Poor Law Act of 1388 to be drawn up, fixing wages for the able-bodied and restricting labour movement to keep wages low.

Like a tale of Early Modern Robin Hood, the arrival of the Poor Relief laws in 1601 meant that parish officials had the legal ability to take from the rich landowners as a subsidy for the poor. Responsible for their own poor, a tax was collected to fund the so-called ‘out relief’ given to the poor.

Strictly for the deserving – the sick, elderly or infirm – out relief came in the way of bread, clothing or fuel if the person lived in their own homes.

Although no mention of workhouses were made back then, the law stated that materials should be provided to allow the able-bodied unemployed to work, or face prison if they refused. However, there are early examples of cottage or parish workhouses or almshouses for those unable to care for themselves.

In Rotherham, the Master’s Workhouse started in a cottage on The Crofts in 1659, when the Earl of Shrewsbury left £100 to the town’s poor. It was run by the Feofees, the town council who were responsible for the poor and infirm.

Barnsley too had a small workhouse on St Mary’s Place in the town centre, which opened in 1736.

Around the early 1800s, The Napoleonic Wars had ended and the nation was thrown into mass unemployment, with a resurgence in injured servicemen returning home.

At a similar time, the advancements in agricultural technology combined with the newly imposed Corn Laws meant that the price of grains rocketed and subsequently, so did food prices. Working families spent much of their wages on staple bread just to survive, with other necessities falling at the wayside.

Spiralling into industrial dissolution, with many manufacturing labourers laid off and the Great Depression in its birth, poor-relief costs rose from £2million to £8million nationwide.

Many in this area merely existed, a bleak existence that was wrapped in extreme hunger and desperation. No NHS or public healthcare was available to treat the diseases that spread like wildfire. Parents couldn’t afford to treat their sick children.

Although many claiming out relief were genuine cases, there were some who abused the so-called privilege and a reform was needed before financial collapse occurred.

The Poor Law Amendment Act was passed in 1834, which now meant that no able-bodied person could get poor relief unless they lived in the workhouse. This statute was put in place to reduce the costs of poor relief to the taxpayers, and workhouses eventually began to evolve in the depths of towns and villages across the country, completely replacing the former system.

Run by Poor Law Unions, which were governed by a board of guardians, workhouses were to be a deterrent for the able-bodied and used only by the desperate.

In Rotherham, a Poor Law Union was established on 1st July 1837, made up of 31 members from across 28 constituencies in the borough; from Wath to Wentworth, Beighton to Maltby and everything in-between.

Chaired by the fifth Earl Fitzwilliam, Charles Wentworth-Fitzwilliam of Wentworth Woodhouse, the union purchased five acres of land on Alma Road from the Feofees for £1,000.

The prison-like three storey structure opened for 300 inmates in July 1840.

In Barnsley, they held out against the union, believing that due to current economic struggles, a short-term solution was needed to combat poverty and unemployment, not the threat of the workhouse.

Their original workhouse at St Mary’s Place, which housed around 60 inmates ages two to 70, continued to operate in an enlarged building, until the union was eventually formed in 1850 with 22 guardians.

Often large and feared by the poor, the stereotypical attitude was of a grim, squalid penal construction that was swimming in infestation and disease.

Whilst some were, with gruelling conditions that evoke thoughts of Oliver Twist-esque slavery, poverty and punishment, others were quite the opposite, referred to as Paupers’ Palaces.

Regardless of individual living conditions, life inside such places was intended to be off-putting. A last act of despair, entering the harsh regime of life inside the workhouse was seen as degrading, with the government not wishing to promote an idle life, paid for by the rich.

The buildings included dining halls and a kitchen, dormitories, school rooms, and rooms for the sick, with a mortuary and chapel, too. Some had a bakery and a laundry, some had small vegetable gardens.

A master and matron would run the daily grind, with a medical officer in charge of the sick wards. Chaplains, porters and school teachers also made up the staff.

At the time, some favoured the idea due to free health care, education and board in times when families couldn’t afford their children to be schooled or cared for.

But conditions were grim and often below board. In 1867, a report of the Rotherham workhouse deemed it unfit to continue in its current condition due to having one nurse for 140 infirmary patients.

The poor conditions of the sick wards were overhauled, with lunatic and infectious disease wards built. By 1894, the majority of the workhouse had been rebuilt to provide a segregated isolation hospital, stables, workshops and a dining hall.

Although food and shelter were provided, able-bodied residents were given menial tasks to earn their keep. Pointless responsibilities like stone breaking and bone crushing. Oakum picking, or teasing out rope fibres, gained workhouses the nickname The Spike, due to the implement used.

Women were to help with domestic duties, such as housekeeping and nursing the sick, which often resulted in defective, insanitary conditions on the medical wards.

In the census of 1891, some of the roles and occupations listed at the Rotherham workhouse included shoe maker, farm labourer, accountant, iron puddler, and cigar maker. Those not fit for work were labelled idiot or imbecile, the mentally ill committed to a life in the workhouse.

Although deceptively similar to a prison or penitentiary, residents weren’t shackled to the walls. They were at their own free will to leave when they wanted, given reasonable notice, of course. Some left for work but came back for a place to stay, some stayed their entire lives.

And some abused the system, leaving in the morning in search of the nearest watering hole, drinking their sorrows away, before turning back up to the porter at night worse for wear.

Upon entering the workhouse, inmates were stripped and bathed, with a uniform given to wear at all times. If you ever left the walls of the building, people would know where you’d come from.

Families were split up, each pushed into different categories and living quarters. Men and women were segregated at all times. If a wife ever dared speak to her husband in the wards, she’d be punished.

The men were split into boys under 14, the able bodied aged 14 to 60, and those over 60, the women the same. Children under two were allowed to stay with their mothers, but all family rights were forfeited.

Food was bland, tasteless and repetitive. Gruel, a watery porridge, was the staple peasant breakfast; Dickens reminds us that workhouses were given an unlimited supply of water and small quantities of oatmeal. But inmates didn’t just survive on this.

Lunch changed daily, with meat occurring on the food rota a few times weekly. Bread and cheese, workhouse broth with barley and vegetables, or steamed suet pudding served plain. Meat was cheap cuts of beef or mutton, often boiled to create the broth for later in the week.

And some workhouses gave glasses of weak beer to their inmates, including the children, as a substitute for suspicious water.

Education and training was free to all whilst residing in the workhouse. Yet it is curious to discover that basic reading and writing didn’t come into it.

Children were often hired out to factories or mines for cheap labour, with some children taken in by outside families or land owners.

In 1867, after much consideration that the workhouse was the wrong environment for children, Dr Thomas Barnados set up proper children’s homes across the country.

In Barnsley, Ashley House at 7 Princess Street was used as the children’s home for many years. In Rotherham, cottages were built near the workhouse on Alma Road, with a further two properties acquired for use as children’s homes on St Ann’s Road and Clifton Terrace.

That was life inside the workhouse, but why did so many end up there?

The physically and mentally ill also found themselves shunned to the workhouse, that was before specialist asylums came into place.

Unmarried mothers, disowned for bringing shame on the family and a reputation to the door. The unemployed and the homeless, those too poor to live. Orphans and abandoned children with nobody left to love. All washed up in the basin of poverty that drained into the workhouse.

Towards the latter end of the 19th century, conditions inside workhouses were somewhat better, although many agree that the poor were treated far better before the introduction of the 1834 Poor Law.

Although many assume workhouses to be solely used in the Victorian times, their use continued into the early 20th century. However, its dishevelling legacy was to be formally ended on 1st April 1930 when the Board of Guardians were officially abolished.

After this time, many buildings were used as Public Assistance Institutions, such as Rotherham. Although not formally workhouses, they still provided accommodation for the elderly, sick and unmarried mothers. Not much really changed, except the uniforms had gone.

The stigma still lived on.

In Barnsley, the site was taken over by West Riding County Council, as it then was. Overtime, the infirmary became St Helen’s Hospital, with the main area of the workhouse used as The Limes geriatric care centre. Today, the site is home to Barnsley Hospital.

With the arrival of the NHS in 1948, many former workhouses were used as general hospitals due to the facilities already in place. Others were demolished to make way for new hospitals.

The Rotherham site became Moorgate Hospital until the 1980s when it transferred to its current site on Moorgate.

Many children were born in the maternity wards of the former workhouse hospitals. Perhaps some reading this will have been. Some would have been treated in Moorgate or St Helen’s. Others may have gone kicking and screaming, petrified of being sent into the workhouse; the name may have changed, but the humiliation still lingered amidst the building.

Although often viewed as a solution to the anguish of poverty, the legacy with which the workhouses leave behind bring a shudder back to reality. A reality we should be glad has never happened since.