For one night only, hop on board the history bus and head on down through memory lane to revisit Rotherham through the 1940s to 1960s.

Hosted by Clifton Park Museum, grab your petticoats and Teddy boy jackets to relive the days gone by at their Very Vintage Evening on Thursday 28th September.

The first of its kind to be hosted by the museum, get ready for an evening of nostalgia with an hour-long film by Yorkshire Film Archives giving a glimpse into Rotherham life that was. 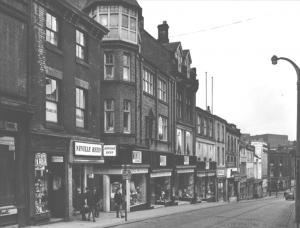 Go back to the days when the bus terminus was in All Saints’ Square where crowds descended from the old Corporation trackless and buses eager to nosey around the town.

The town’s streets were bustling with busy shoppers visiting the hundreds of independent shops. Carpets from Handleys, furniture from Woodleys, clothes from Speeds, shoes from Langtons and allsorts from Tops. They all saw high levels of trade and kept going for years.

Or a visit to the old Domine Lane market and Co-Operative on Westgate for everything you could dream of and more. Stopping off for a coffee at Davis’ before heading back home.

Courting couples went on dates to one of the many picture palaces throughout the town, seeing a different picture everyday if they liked; if you went to Odeon, you could sometimes hear the banging from the forge next door. 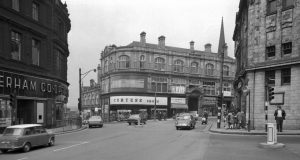 Friends met up for a beer in the many well-frequented pubs across the town, the likes of Turf Tavern, Falstaff Inn and College Inn a distant memory.

The characters that would be there week in, week out. Vinegar Liz with her twin set, powder-white doll face and ruby rouge cheeks and lips. Or old Auntie Eunice complete with wheelbarrow looking for vegetable peelings for her pigs and chickens.

A place where everybody knew each other and community spirit was thriving. Over 20,000 men worked at the Templeborough and Parkgate steelworks during that time, camaraderie in abundance.

New estates like Kimberworth Park and East Herringthorpe were built in the 50s and communities continued to come together, chatting on the back yard, waiting for the bread van to come round from Mother’s Pride, Veers or Jacksons’ bakeries.

Days as a family spent in Clifton Park with the donkeys and animals or splashing in the paddling pool. Cricket games and football matches on Herringthorpe Playing Fields. Trips to the old Main Street baths where you’d polish the nose of Burgess’ statue with your swimming towel.

Who remembers going to the annual fair at The Statues, now the police station? Having a ride on the swing boats, wincing at the smallest Siamese twins bottled in jars, or marvelling at the many elaborately painted caravans that descended every year. And of course, when Billy Smart’s Circus was broadcast on TV from here in Rotherham in the late 50s.

Roll up, roll up 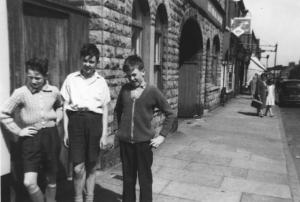 Along with the film, titled Come with me to Rotherham, the evening will also offer a swing dance taster session and vintage tea party, plus the exclusive chance to premier the new exhibition, Childhood through the Ages.

Filled with things you might find in kids’ bedrooms from the 1940s to late 80s, stories are retold by once-loved objects with everything from a 1960s toy pram to a 1980s pogostick – both possibly bought at the all time favourite Coopers Toys on Doncaster Gate. 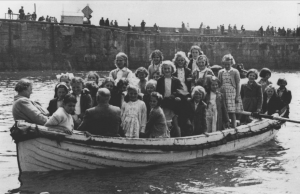 An old Oakwood tie and scarf brings back memories from a lady who attended the former all girls’ school in the 50s, who now resides in Canada.

A Shadows Club certificate and record remind another lady of the time her husband was chased to the train station in the 60s, mistaken for one of The Shadows’ rockers.

And Barbie and Sindy dolls play sets bring back fond memories of two Bramley sisters who spent hours playing together in the 1980s.

From clothes to toys, music to magazines, the exhibition chronicles life growing up in Rotherham, with a warming sense of happiness of the greatest days of our lives.

Childhood1 Family10 History27 Rotherham32
Previous
Out and About
Read more