Throughout the year, theatre continues to hold prevalence in the hearts of many people who enjoy watching a show, musical or play. Yet at Christmastime, it holds special memories with family pantomimes bringing the magic of theatre to life across generations.

In Barnsley, the theatre scene has fluctuated over the years, with new theatres arising, others warranting different usages, and those which we have lost along the way.

Thanks to the chairman of Friends of Barnsley Archives and former actor and producer, Roger Walton, we present to you a brief history of the tales of Barnsley’s forgotten theatres.

*photos thanks to Roger and the Tasker Trust 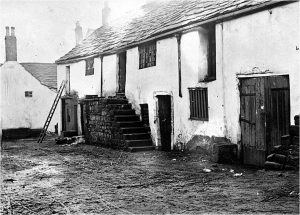 The first paid-for performances in Barnsley came in 1798 when touring company, William Collier and William Huggins, secured the initial performance license for financial reward in this area, covering Yorkshire, Nottinghamshire and Lincolnshire.

Running for 21 nights, the company brought 12 players with them for outdoor performances, with the Barnsley leg held outside in the Old White Bear Yard on Shambles Street.

It wasn’t until 1815 that Barnsley received its first theatre, with the Georgian playhouse – aptly called The Theatre – opening on Wellington Street at a cost of £1,400. 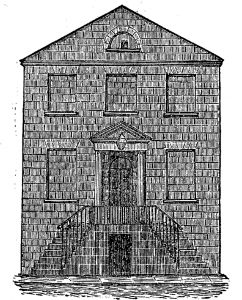 While The Theatre held a few productions, it was mainly used for meetings by the Rotherham Theological students, with Rev. Ellis of Sheffield Road Calvinistic Chapel referring to it as ‘The Synagogue of Satan’.

In 1878, it became the Salvation Army barracks, before being refurbished to an 800-seater theatre and renamed at the Theatre Royal in 1883.

However, its rebirth was short lived, with an 1897 bar fire closing the theatre.

For the working class, the 300-seater Surrey Music Hall was built on Westgate in 1862, opposite where the magistrates’ court is. 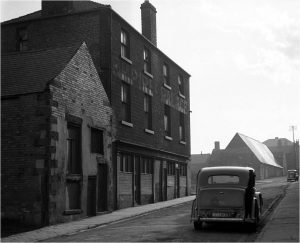 With popular songs, comedy and variety acts, music halls differed to traditional theatres by allowing smoking and drinking in the auditorium; Surrey made a lot of its money from its two bar, selling a pint of beer for halfpence.

Attracting the likes of George Formby Snr and Little Tich, their motto – Cleanliness, Respectability, Refinement and Brilliance – meant it soon rose to popularity.

However, after rebranding as the Empire Palace in 1874, the music hall closed in 1908. Like many others, it became less popular during and after the war, with drinking banned and jazz and swing music taking prevalence.

After stints as a club and paper warehouse, the building was demolished in 1955.

After the closure of the first Theatre Royal, a second, larger theatre opened on Wellington Street in 1898. With 1,200 seats, the building cost a whopping £16,000 and is one of the country’s most important remaining Victorian theatres. 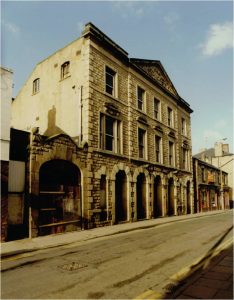 It took 11 months to build, sporting a handsome entrance with American walnut and brass fittings. Cast iron columns supported two horseshoe galleries, with below-ground stalls, a separate gallery entrance and a bar on all three levels.

With gas lighting, hot water and heating, stars were treated to above-standard hospitality, with eight dressing rooms in total.

Schools used the theatre for speeches. Amateur theatres were granted production use from 1919. And a whole host of comedians and variety acts took to the stage, including a young Charlie Chaplin who appeared in Sherlock Holmes in 1904. 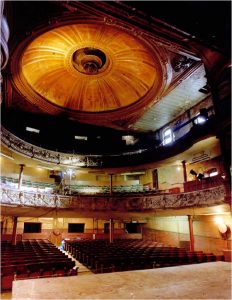 From Arthur Askey to Ted Ray, Hylda Baker to Norman Evans, the crowds piled in. None more so than Gracie Fields who brought a record audience of 1,390 people – so much for health and safety.

Rotherham’s Sandy Powell performed his famous catchphrase – Can You Hear me Mother? Before he became the world famous female impersonator, Danny La Rue appeared in Soldiers in Skirts after serving in the war. And Arthur Lucan took to the stage one last time in May 1954 with his Old Mother Riley skit; the following day, he collapsed in the wings before a performance at Hull and died in his dressing room.

When television arrived in the 1950s, theatres took a huge hit, with the Theatre Royal starting to struggle to pull in audiences. In 1954, the owners spent £10,000 on redecorating the stalls only for it to close its curtains for good two years later.

In 1961, the Royal became Barnsley’s first bingo hall, before becoming a nightclub in the late 90s. 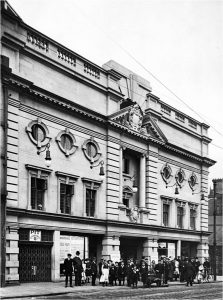 To compete with the Royal, a larger capacity theatre, the Empire Palace of Varieties, opened in 1908 on Eldon Street.

Seating 2,600 people, the theatre had 12 dressing rooms and an electric sliding roof to let out smoke– costing £17,500 to build.

It was one of Barnsley’s popular variety theatres, yet its gigantic costs came at a short life span.

The theatre closed in 1920, reopening as the 1,160-seat Empire Super Cinema. Sound was installed in 1929 to offer ‘talkies’ with the cinema later renamed the Gaumont in 1950. Shortly after modernisation, a fire totally gutted the building in 1954.

The new Gaumont, which opened in 1956, was a bland replacement for the ornamental Empire; yet the cinema still stands today as the Parkway. 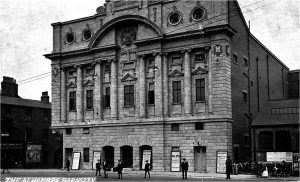 Now a busy shopping centre, Barnsley’s Alhambra was once the site of a theatre.

With 2,600 seats, the Alhambra was opened in 1915 by Countess Fitzwilliam of Wentworth Woodhouse.

After ten years as a live theatre, the Alhambra closed in 1926, becoming a cinema until 1960.

After two years stood empty, the stalls were transformed into a bingo hall before the building closed indefinitely in 1979. After demolishing the Alhambra, the shopping centre was built in the 80s, keeping the former name of the site. 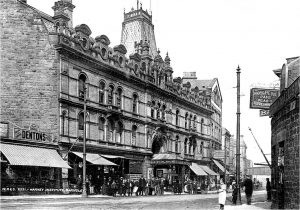 While the Civic didn’t open as a theatre until the 60s, the original building opened in 1878 as Barnsley’s Mechanics Institute and Public Hall.

Built by Charles Harvey, the hall was renamed the Harvey Institute in 1890, housing the town’s library, arts and entertainment. Run by the council, the institute was also home to Barnsley School of Art and Technical College.

Moving pictures started to be shown in the early 1900s. In 1908, during a penny performance for children, a stampede on the staircase resulted in the death of 16 children under ten, another 40 seriously injured.

The college moved out of the hall in 1932, with a restaurant and museum opening during the 40s. After major restorations, the Civic Theatre opened in 1962, offering a variety of performances from pop shows and opera to snooker and wrestling.

In 1998, the theatre closed due to maintenance costs, remaining shut for a decade. As part of the Rethinking Barnsley development initiative, the Civic reopened in 2009 as a mixed usage venue including offices, a gallery and a 384-seater performance space. 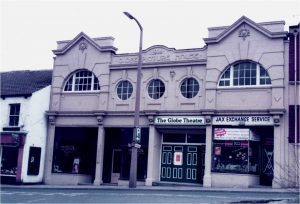 At a time of thriving entertainment in the town, Barnsley’s first cinema, the Globe, opened on New Street in 1912. With 1,000 seats over two levels, the cinema’s proscenium arch was 25 feet wide.

The cinema became a bingo hall in the early 60s until it was bought by South Yorkshire County Council in the 80s to make way for the new dual carriage way which was to be laid.

However, thanks to an application by Roger, the building was leased to the newly-formed Barnsley Theatre Trust, which included Barnsley Playgoers, Barnsley Junior Operatic Society and Barnsley Children’s Theatre, for use as an amateur theatre.

Opening in 1983, the Globe was used avidly for amateur theatre by the Trust, with some famous faces also making their way to Barnsley. 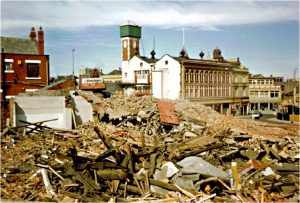 In 1988, Hollywood arrived in the Tarn as filming began for Warner Brothers’ Bert Rigby You’re a Fool, with Robert Lindsay, Robbie Coltrane and co shooting scenes on the Globe stage.

The Globe also started the careers of local stars, too. In 1989, Roger produced Annie, choreographed by Suzanne Grand who went on to choreograph the Full Monty.

Just ten years after acquiring the site, the Trust waved goodbye to the Globe as the doors closed in 1990 to make way for the building of the western relief road. 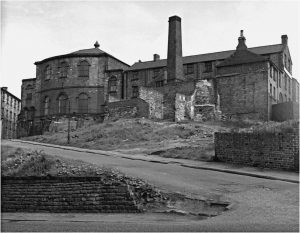 Last but not least, our attention turns to Barnsley’s remaining theatre – the Lamproom on Westgate. The building opened in 1794 as a Methodist chapel, holding a long service until it was purchased by the National Association of Boys’ Club in 1948.

With a library and a gym for basketball, gymnastics and boxing, along with table tennis and snooker facilities, the club was also used by Barnsley Junior Operatic Society from 1953-1965.

In 1998, the boys club was purchased for use as a theatre thanks to John Kelly and his wife remortgaging their house to pay for it. 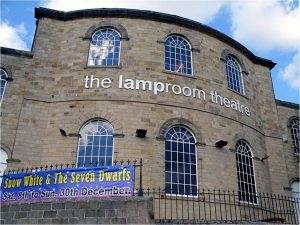 Under the leadership and enthusiasm of John and over 100 patrons, subscribers and volunteers ‘The Peoples Theatre’ launched in 1999 as The Lamproom Theatre.

After extensive fundraising, the Trust managed to raise the monies needed to restore the building and pay John back.

A grade II listed building, with continued support, the Lamproom will stand prominent in Barnsley’s culture future for years to come.